Or, a compilation of bits and pieces that were sitting about with no particular post to, er, post them in! 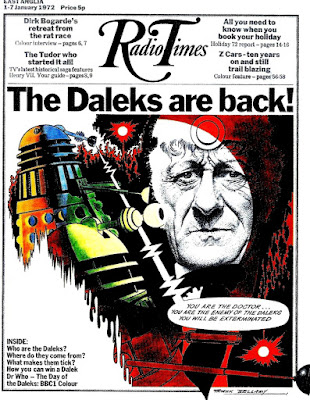 To this very month the appearance of the Daleks on the cover of the Radio Times is enough to trigger a little excitement but this is my favourite Dalek RT cover of all time. Vivid in colour and imagery it is a perfect capturing of a moment in time. And because it’s artwork rather than a photo it will never date and looks as brilliant today as it did to a child in 1972. 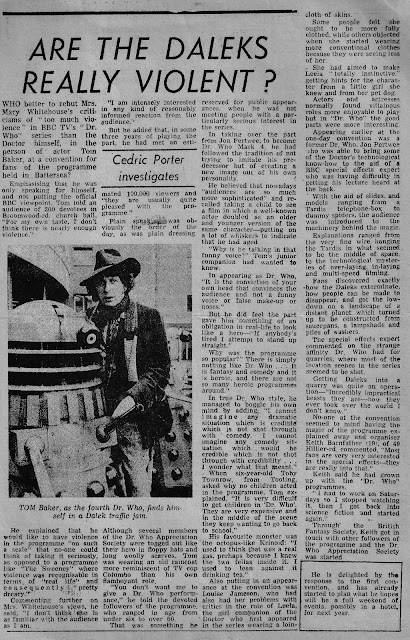 So this is an old article that manages to encompass violence in the series as well as touching on the first Doctor Who convention. This is the sort of press coverage the programme got in those days which takes a more serious tack than the celeb- type snippets that abound these days. Doctor Who has never been more covered in the media than it is now yet that coverage has never been so forthy and insubstantial. 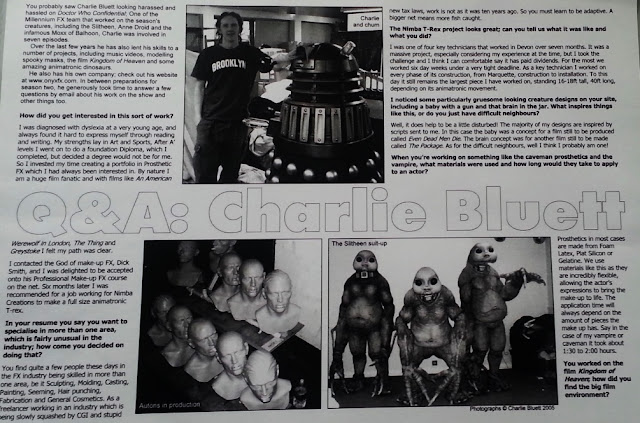 This is from the issue of This Way Up, the fanzine, that covered the first season of returning Doctor Who. Nobody from the series then was allowed to do interviews with amateur publications as all the exclusives went to DWM or the mainstream media. However by chance I happened to contact one of the FX guys on the show, Charlie Bluett and he did a Q&A interview and even sent me some exclusive behind the scenes photos. I’m not sure if he was supposed to but he did anyway which just added a great extra to the issue. 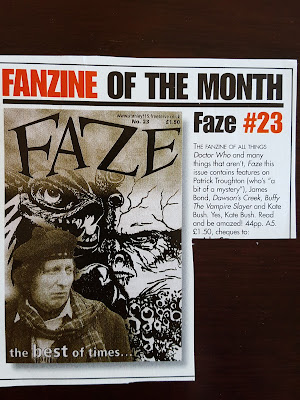 SFX was a breath of fresh air when it started and they used to do a Fanzine of the Month which Faze won several times. Of course there’s always the thing that when you know someone on the editorial team people think these things are favours but I like to think they’d have given me the award even if we’d never met. After all Faze was a great fanzine…. 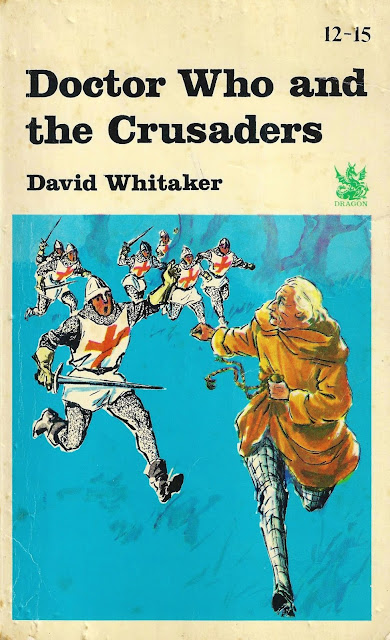 I bought this at a jumble sale at school when I knew nothing much about the history of the series and liked it so much I committed the cardinal sin of colouring in the illustrations! Making it worthless now of course. I still have it somewhere but if only I hadn’t coloured in those pictures it’d be worthy of Antiques Roadshow prices soon! Love the cover too suggesting a burst of speed which I’m absolutely sure Billy never managed. 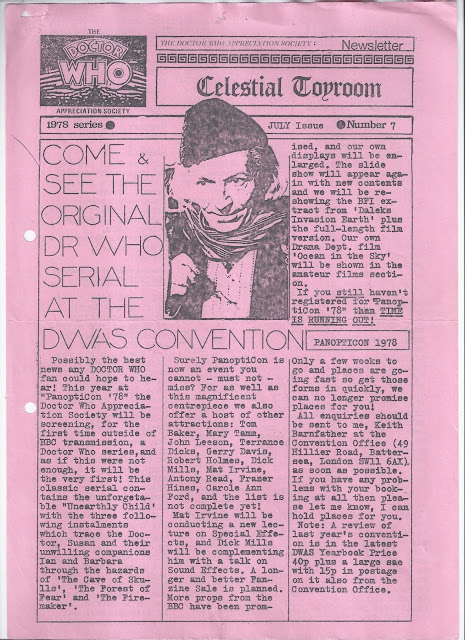 I never got round to CT 1978 in the Fan Scene series partly because the scanning of these old zines is terrible, the print not being strong enough to be readable these days. But I like the idea they had to use various stories to form the basis of a news item. This issue was the exception advertising the showing of the first episode at that year’s convention. Incredibly nobody would have seen that episode since it was broadcast in 1963 and to show it, the DWAS had to buy it on a film reel! It all sounds so old fashioned when you think man had walked on the Moon nine years earlier! 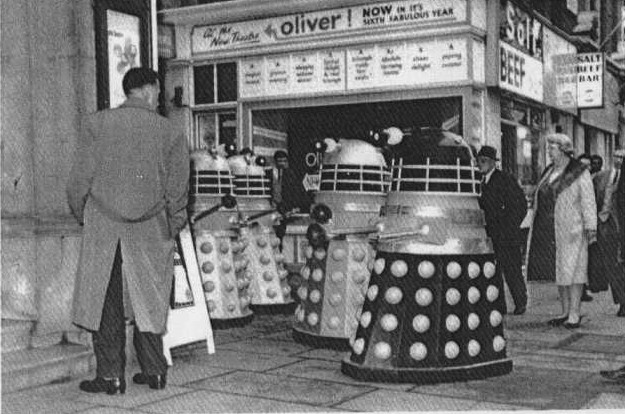 This is a publicity photo from the Sixties Dalek play which someone sent me for an article that appeared in Faze. It’s not often seen so I thought I’d put it here- and it does look like the Daleks are remonstrating with that man for taking a leak on Wyndham’s Theatre! 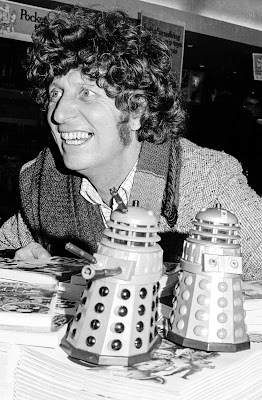 Tom looks happy here probably right in the middle of his Imperial period. 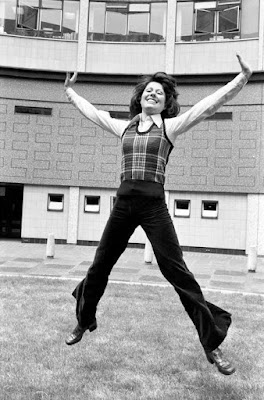 This is a fun publicity photo of Lis Sladen when she was the new companion. She used to live near us just off Allerton Road, behind Woolworths. I never actually saw her but I did meet her mother once. My Dad used to play the piano for some of Lis' dance classes. Decades later at a convention I found myself in a lift with Lis Sladen but it was so late and if I’d started burbling on about that she’d have imagined I was a crazy. I did however check there was an escape hatch in case the lift juddered to a halt and we had to escape in a hurry. 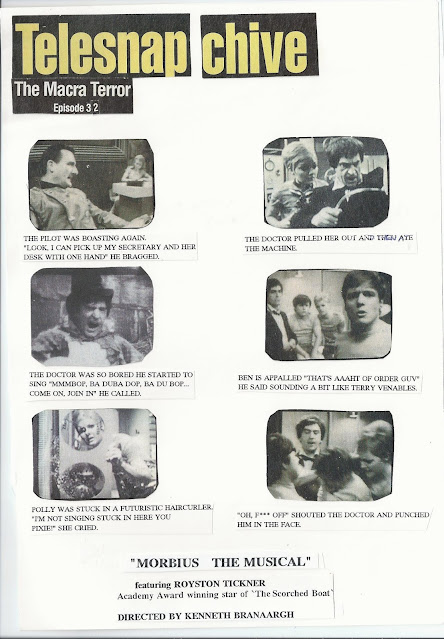 You could no doubt do this now with digital photography and so forth but I did these with scissors, glue and a bit of luck. The added fun was that I’d not seen these episodes so I could make up any old nonsense.

Have you guessed yet that this is the last post of this blog! I’ve more or less done all I wanted to do here and it has been something of a stop / start blog in any case. Any future Doctor Who content reviewing new episodes and perhaps the occasional retro feature will appear in This Way Up, sort of going back to where it started. Meanwhile this blog will remain in the digital ether floating majestically onwards to wherever. Thanks for your attention and support; it’s been a multi – dimensional experience!

Email ThisBlogThis!Share to TwitterShare to FacebookShare to Pinterest
Labels: Misc