With salmon coloured front pages the June issue announces more details of next season including the title of the opening story- `Arc of Infinity`. Sounds great doesn’t it?  Also the worst kept secret of the time was that Janet Fielding hadn’t really left at the end of `Time Flight` and here we learn she will indeed be back next season. Under the heading `Crisis` the issue reveals that someone called Sarah who dealt with fan mail in the programme’s production office has left; possibly the second fact being a reaction to the first!. Additionally because of the World Cup there probably won’t be any repeats this summer. So is this what constituted a Crisis back in 1982? If only that was all we had to concern us now!! The front page also reports the death of Harold Goldblatt who was in `Frontier In Space` and that the marriage between Tom Baker and Lalla Ward has ended after sixteen months. 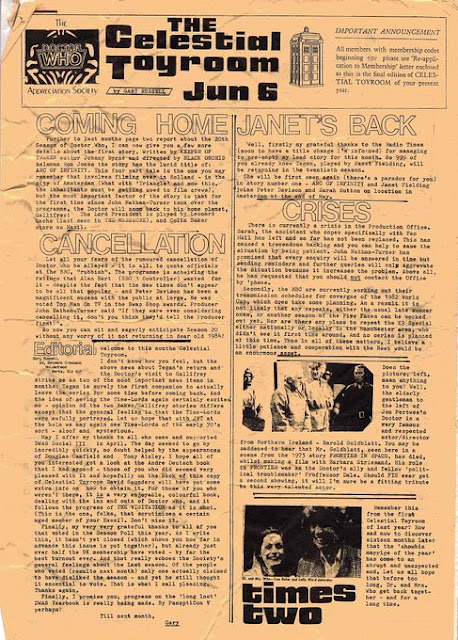 Inside the Co-ordinator’s Corner reports the unfortunate theft of six publicity boards from the Society’s stall at DWASocial 3 recently (though I seem to remember some people at the time thought Uncle David had just mislaid them behind his enormous round sofa!). A myriad of fanzine ads dominate this issue including `Experiential Grid` 6, `Moonbase` `The Inferno Magazine`, `Chronotis` and `Skaro`.

July’s banner reads `Earthshock- No Shock!” a reference to the results of the Season Poll and leads with sad news of the death of Elwyn Jones, co-writer of `The Highlanders`. He was best known though as the creator of both Z Cars and Softly, Softly. There’s news on new costumes for season 20 which contains a large space in the middle of the paragraph, being news that shouldn’t have been in there. First news of the possible return of Omega is also mentioned courtesy of a story that was in the Daily Express suggesting that `Arc of Infinity` would be based around “the Doctor’s mission of tracking down renegade Time Lords” (?) It also flags up a dual role for Peter Davison.

In his editorial this month Gary Russell feels he has to say that the DWAS does not have any bias towards a particular Doctor after a member had written in to say they were leaving the Society as they did not like Peter Davison’s portrayal. Of course if you flip back a couple of years members were vociferous in their criticisms of Tom Baker and had the DWAS been going before 1976 you would not doubt find similar rants about other Doctors. Fast forward to today and Twitter will sometimes flare with debate over the merits of Jodie Whittaker. Appropriately enough the passing of time sorts these things out. Gary asks the discontented member to “think again.” I wonder if they did?

The Season Poll results then with about 75% of members seemingly voting the outcome was never in doubt but lets work our way from the bottom to the top starting with last placed `Four to Doomsday` with 1842 votes. Much better thought of nowadays this story suffers perhaps from its slow pace compared to others and seems to have generated little comment though some called it “boring”. Giant frogs were just not popular in 1982! Coming in sixth place- and this is a shocker- is `Kinda`. Yep really. Now thought of as an all time classic it took several years for the art of this story to percolate amongst fans and with 2062 points it was not that far from coming last. It seems to be a story either really liked or disliked mostly placing either first / second or sixth / seventh on voting forms. In what was a very visual age it may have been the obvious studio set or plastic snake that people noticed more than the literate script and interesting characters. Even so to place below `Time Flight` is bizarre even for the early eighties! With 2287 points Peter Grimwade’s Master / Concorde mash up seemed to fit the bill. Gary R wisely puts its high result partly due to people voting after part 1. Had they waited till it was done it likely would have fallen to the bottom of the basket and definitely would today.

Fourth place goes to `Castrovalva` with 2467 points with particular praise for Anthony Ainley’s performance though one comment calls the first episode “pointless.” It was very close between that story and with 2552 points, `Black Orchid` showing surprisingly strongly. It seemed to stand out amidst the more sci-fi elements in other stories.

In second place then was `The Visitation` with 2887 points accrued and much praise for the look of the story and also the performances especially Michael Melia. As the front page of this issue suggested the poll winner was no surprise at all with `Earthshock` trouncing allcomers with 4037 points. I do remember how stunning this was to view the first time especially as I had no foreknowledge of its two `shocks`. An all time classic for sure.

Much of the rest of the issue is given over to fanzine adverts including one from `Ol’ Writers Frond`, issue 1 of `Beyond Cygnus A`, Issue 6 of `Ark in Space`, a double issue of `Morestra` including an interview with John Nathan-Turner. I wonder if every answer was either “No comment” or “stay tuned.”. There is also a prominent ad for `Shada` issue 10. 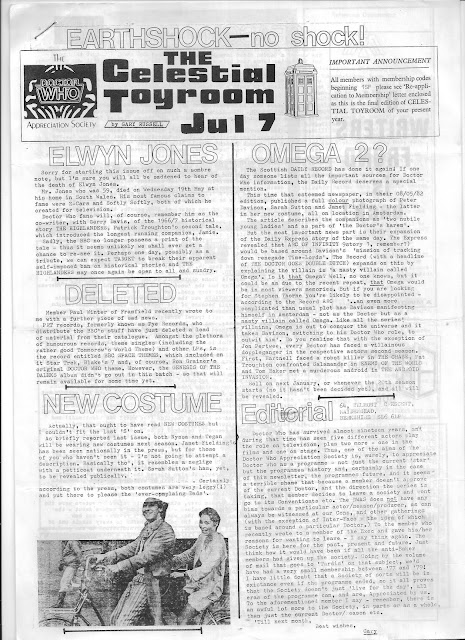 We’re back to a pink cover for the August issue which leads with more Season 20 news including the news of Michael Gough’s return to the series as well as….no….not….Paul…. Jerricho. The name of the third story is revealed as the curious `Mawdryn Undead`. The death of Humphery Searle, who penned the incidental music for `The Myth Makers`, is reported and there’s confirmation that a pantomime written by JNT will be staged and that tickets are selling well. There’s also unfortunate news regarding thefts from both the Blackpool and Longleat exhibitions plus more welcome news about a possible missing episode find believed to be episode 6 of `Reign of Terror`.

Amazingly it seems as if fans have been phoning John Nathan-Turner at home! Quite how they obtained his number isn’t mentioned but they are asked to stop calling him. There’s also some wallpaper out featuring the Doctor, a Dalek and the Cyberleader. I had to check this wasn’t the April issue tbh!

The Birmingham Panopticon is round the corner and in his column organiser Paul Zeus says there will be a Voc at New Street Station to welcome attendees. In this month’s Swap Shop there’s a notice from one time CT editor Gordon Blows who seems to be selling lots of stuff including CT’s and `Tardis`. Does this mean he abandoned Doctor Who? Meanwhile Andrew Havery is optimistically wishing to swap the latest Target books for mint first editions. He’ll be lucky!