Series 2@14. Emotional finale draws together the season’s themes.
The most remarkable aspect of this gripping finale is not the Daleks vs Cybermen dust up nor the skyscraping concepts on display but the acting of Billie Piper. When it comes to the crunch she delivers a performance that is so nuanced and interesting it takes your attention away from the metallic battling elsewhere. Rose Tyler’s always been both normal and yet unusual with a rare empathy for the victims of the Universe; that’s why she and the Doctor are such a good fit. There’s a scene early on where she stands up to the Daleks with a mixture of cheekiness and grit. It’s one of many moments where Billie P nails exactly what Rose should be like, the template for the modern companion. When we reach the sad ending of the story the way she just crumbles on the other side of the Void seems so real and raw. The series did- and in some ways still does - miss her not that I’m suggesting she keeps popping back of course. In fact the show almost undid the simple beauty of the final Bad Wolf Bay goodbye when Rose did indeed come back a couple of years later. “Will I see you again?” she asks tearfully. “Yes, in a couple of season’s time” the Doctor doesn’t say. 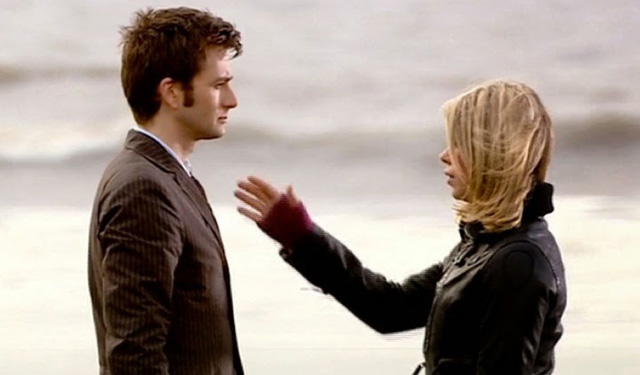 That’s Russell T Davies all over though; stretching and moving the parameters of the show to keep it fresh and also to develop ideas. The plot on display in this story is actually quite straightforward; at this stage in a season finale you’re either going with it or not and there is much to enjoy in what is a very strong example of the artform drawaing the serie's themes together while also upping the ante when it comes to the thrills. It’s interesting how often the episode draws back from seemingly certain catastrophe with a surprise arrival. The alternative Earth rebels showing up, the Cybermen choosing a few seconds before Jackie is due to be Cyberised to stop and discuss local politics and best of all Cyberman Yvonne somehow overcoming her converted brain to defend the Doctor and co. This is turned on its head at the end when Rose’s lever goes wonky and this time there’s no cheeky fix. All these things can seem too contrived at times as if there is nothing more here than the need to leap from one thrill to another. Yet what thrills they are!
As for the denouement, you might say that there is no way that the Doctor and Rose wouldn’t be lamped by at least one of the hundreds of flying lumps of metal crashing about them. Nonetheless it is a dramatic climax which feeds from the sort of images that would once be the province of a different medium. Thousands of Daleks flying about while London burns below is straight out of comic book territory. We also get the much anticipated Daleks versus Cybermen fight before which both sides amusingly give each other a bit of verbal! It’s a shame given the number of each they had that a bit more time wasn’t allotted for a more extended battle before the Void was opened. 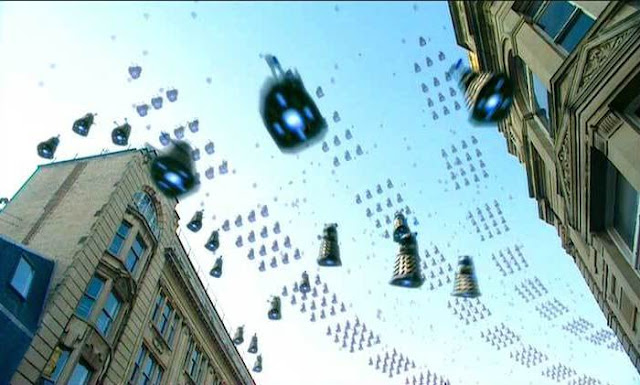 The episode actually contains three emotional scenes, the two well known ones which seperate and briefly reunite the Doctor and Rose plus the reunion of the Tylers. Away from the thrum of battle and the technology, a simple conversation in a corridor between two people who look like the spouse the other has lost and they make a connection. This is beautifully written and persuasively played by both actors. The better known farewell on the beach scene does convey the awkwardness of saying goodbye in a limited time when you actually don’t know what to say but if you think about it is one convenience too many in an episode full of them. The moments when both the Doctor and Rose are on opposite sides of the wall (ie the Void) would have been a more honest way of ending it. In real life we rarely get the chance for the big goodbye we would like.
Tardisode: A rather stunning final Tardisode features a newsreader conveying the state of emergency when interference gives us lots of brief clips of Daleks, Cybermen and their battles. This is a triumph of editing and successfully conveys the chaos of the invasion.