Series 2@14. Second part of alternative Cyber origins story has surprising heart.
After the awkward `Rise of the Cybermen`, part 2 of the story proves to be better if only for the fact that a lot happens. Coming across at times like a pocket 45 minute movie, `Age of Steel` is an old fashioned adventure in which our heroes storm the headquarters of the villain three ways and each has a tale to tell. Furthermore it belatedly does introduce something of the people who become Cybermen. These are fleeting (because the pace of the episode is speedy) but important moments where the original person behind the metal mask is revealed in tragic metallic tones. In both cases the person was female which somehow makes it more poignant. With John Lumic largely out of the way for the greater part of the episode things become rather more serious though he does return in an unintentionally amusing giant armchair as the Cybercontroller. Its then you realise, this is really a comic book story. Everything is broadly sketched with just enough emotion to pull you in. And that’s what makes if fun. 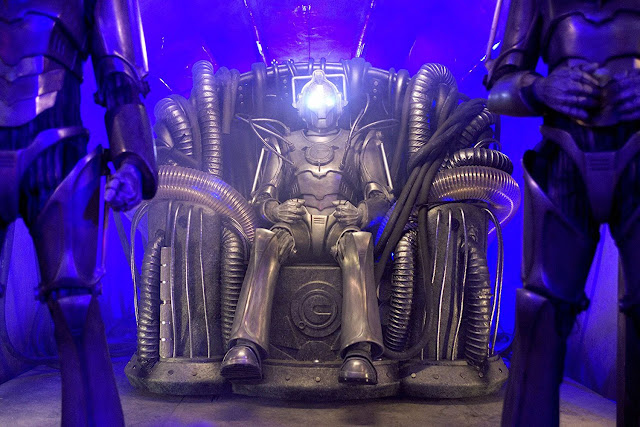 One aspect that works especially well is the utilisation of all the characters. There are a lot of them but each not only gets something to do but also plays an important role in the development of the story. The Doctor and Mrs Moore’s sojourn through a crypt of dormant Cybermen is a visual highlight while their creepy surroundings are counterpointed by their very human conversation. I like Mrs Moore who you imagine putting the kettle on while chucking a grenade out of the window! Somewhere in a parallel TV world it was The Preachers who became the Doctor Who spin off and Helen Griffin would be the lead. Free of the rather gauche Ricky who is despatched early on, Noel Clarke is freed up to become the Mickey we love; irritated by the Doctor and Rose’s closeness, bold in a foolish way and determined to do the right thing. Andrew Hayden Smith’s eager Jake meanwhile is sort of what Mickey would like to be and the duo work well together.  Don’t you just love it too that the airship has one of those old fashioned steering wheels and a big box with the vital Inhibitor control open for anyone to access; when Jake jokes about this moments earlier I didn’t think it would really be there! 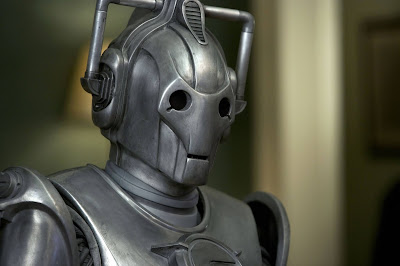 If it seems that Pete and Rose get the short straw in simply being captured it’s a part of the narrative that really hammers home the seemingly overwhelming odds stacked against them. I remember when this was first shown and I wasn’t too keen on the Doctor’s grandstanding bravado when in the clutches of the Cybercontroller but it makes sense really. Lumic –as- was is fascinated by the Doctor and their debate may well be a re-write of that in `Earthshock` but is still worth saying. If you can cope with the giant Cyberseat there’s a lot to be gained from this sequence.


The climax is unadulterated James Bond blowing up the base stuff and has such momentum that you can overlook the fact that the sheer weight of the Cybercontroller Lumic- even without his big chair- would probably bring down the whole rope ladder. It’s a typical gambit for an episode that proves an enjoyable romp which probably doesn’t bear thinking about too much.


Tardisode: A rather gruesome schematic shows what we don’t see beneath those whirring blades. It seems that rather than convert the brain is simply scooped out and transferred into the Cyberman. Yuk.