To celebrate fifteen years since the series returned, here's a lengthy summary of the momentous events in the Doctor Who world in 2005, originally published in This Way Up fanzine in July of that year. 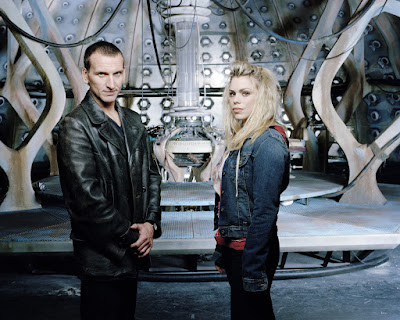 Imagine you’re a Doctor Who fan. One day in the 1990s someone appears from the future (and, hey, he might be a bit Northern with prominent ears and a black coat, you never know) and tells you that your favourite telly show will be back on air in 2005 and not only will it be great, exciting, terrifying and epic but it will be a ratings trouncing success, the serious critics will rave and even people who previously thought it was all silly wobbly set laden kids stiff will swoon when they catch an eyeful. There will also, he adds with a twinkle in his eyes, be Daleks, millions of them. “Fantastic!”  It sounds like something that could never happen but here we are in 2005 and it has happened. It were never been like this in the old days when effects were rarely special and Daleks were mostly cardboard cut outs and fans existed in their own enclosed world. A short write up in the `Radio Times`, the odd snippet wedged in the midst of a big `Saturday night on BBC1` trailer and that was your lot in the halcyon days of the 70s. Doctor Who, however successful it was, never had the cachet it has right now.Throughout its run, this new series was constantly placed in the top 20 shows of each week, with audience shares that remained consistently high at around 35 -40% despite fluctuating ratings and was the most watched home grown drama series of the first half of the year. More than that it saw off direct opposition with such finality that ITV eventually gave up and started showing any old film instead. With average ratings of almost 8 million there is no doubting that the series is now more commercially successful than ever before. In these days of multi channels and declining overall audiences its roughly the same as if 70s Doctor Who had been watched by 15 million people each week, which it certainly wasn’t. Yet until February 2005 there was little sense of what was to come after an 18 month production schedule that had seemed to go on forever. Then, all of a sudden things began to lurch into gear with all the ruthlessness of an invasion.

Season 7@50. It may be seven episodes long but there is no fat on this story so much so that a lot if packed into this final one. The Doctor’s captivity in the Silurian base after he was taken from the lab is short lived, pretty soon he’s back with the reptilians though as they employ a fall back plan- destroying the Van Allen belt. I had to smile at how easily and simply this actual real life bit of science is explained knowing its equivalent in the modern series would be a good two minute lecture from the Doctor all about it. You do wonder though why the Silurians didn’t just go with this plan in the first place as they must have known what was inside the research centre. Perhaps there had been arguments for months between Old and Young Silurian on this particular topic. 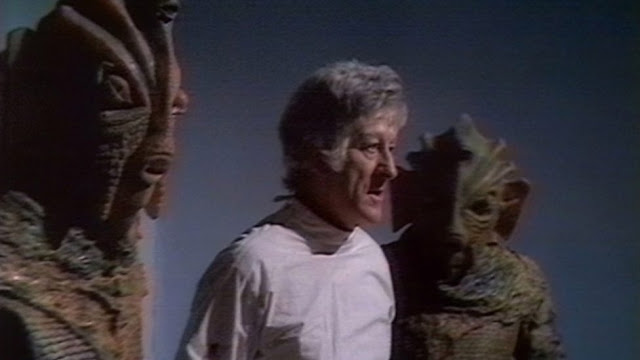 So it was about authorship after all. Ascension of the Cybermen turns out to have been undermined throughout by a streaming hacker who couldn’t resist introducing it himself at the end and boasting of his reinterpretation of the ensuing acts, of which the Doctor was both audience and unwitting star. The Timeless Children was visually engaging television and I was surprised by some of the resolution it presented, if only because I was expecting something more complicated. Performances were very strong, and as with Ascension of the Cybermen, I felt an energy in the production which I’ve rarely experienced in the Chibnall era. There were a few moments when it seemed The Timeless Children did not marry so well with Ascension of the Cybermen, however, and in hindsight the episode left lingering doubts about the wisdom of the decisions therein. 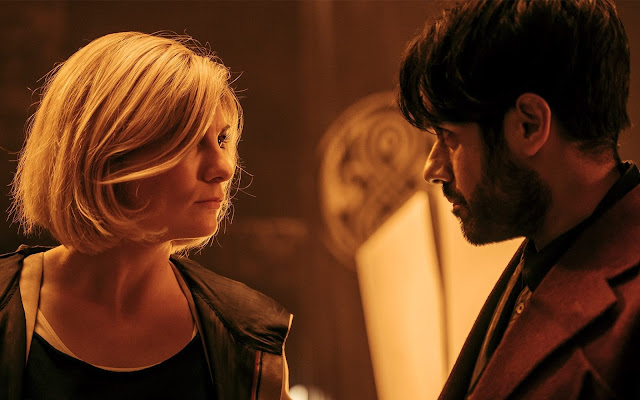 Season 7@50 Unexpectedly this episode seems gruesomely topical right now and judging from this week’s headlines very little has changed when it comes to dealing with a dangerous virus or infection. What was entertainment fifty years ago is now a reality though I doubt if a race of subterranean lizards are responsible. Given this accidental topicality it is even easier to admire the manner in which the production handles it. Plotting the outbreak from Masters to the ticket collector to other passengers and then a phone call that reveals the first foreign case you can see how easily something like this can take hold. Just like our current coronavirus the Silurian’s version doesn’t infect everyone but some die quickly. I think the way the production conveys all this is masterful and quite bold. After all imagine that back in 1970 over seven million viewers watched several minutes of two actors doing chemistry, putting blood samples on slides, making notes and looking at the sample under a microscope. Somehow in the current light it seems much more urgent and serious than it might back then. 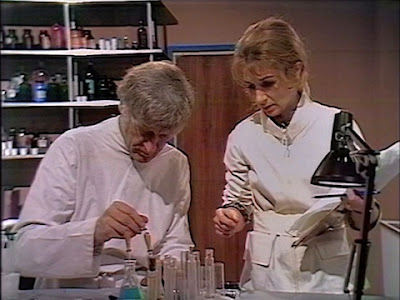 (John- This is not a review of the episode, that is coming later this week, but it does include spoilers about the episode.) The major problem facing anyone wanting to attack The Timeless Children for breaking Doctor Who continuity or ‘the canon’ is the fact that it sort-of fixes it. There are quite a few moments of Doctor Who continuity that make more sense after The Timeless Children than they did before...