Season 7@50 Something I’d never really thought of before is how versatile the Silurians’ third eye is. In this episode, a large chunk of which we spend in their subterranean company, it is used to open and close doors, create a forcefield, operate a console and finally to kill another Silurian. Presumably it is controlled by the power of thought but even so it must have to be concentrated thought of some strength. Perhaps that’s why they are so jumpy. Each of the three main Silurians we see seems to have been given a different movement in order for us to differentiate between them and it gives them an eerie quality. They are jerky movements whereas we might expect reptiles to be slinkier. The most remarkable aspect to them is that Peter Halliday does all the voices arguing with himself over Silurian politics. It’s a cruel game with someone able to seize power simply by turning that third eye on their rival. I’m not sure why Old Silurian as he is known in the tv version (see below about the novel) doesn’t fight back, maybe its because he’s old? As for Silurian scientist (aka K’To if you’re reading the book) he’s clearly not a fighter and will acquiesce to whoever’s third eye looks the most threatening. 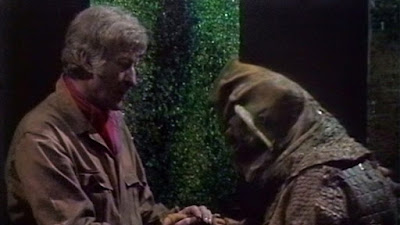 Watching the episode it struck me how weird it must have been to turn on the TV when Old and Young Silurian were debating the situation. Two talking lizards occupying the screen. Subsequent iterations of the species have been made increasingly human- like in their behaviour and speech patterns whereas here a lot of effort has successfully gone into making them most definitely non- human. It is emphasised especially in their description of humans as “apes”.


It is this attention to detail that raises this story above most in the classic series canon. Take Doctor Lawrence for example. In the face of increasingly alarming evidence he digs in with his view that there’s too much running around in caves and not enough help being given to his research centre. Peter Miles is the master of droll lines but his best moment this week is the looks he shoots at the others during their meeting to try and work out what to do.
There’s also an excuse to keep the Doctor in the Silurian base long enough for him to take a look at some bits of the species’ civilisation. There are a few glimpses that it would have been nice to see more of. There’s a real purpose to Jon Pertwee’s playing of the scene where he tries to convince the Old Silurian to have a go at peace and I noticed the latter doesn’t even respond when the Doctor mentions the humans are not his people. 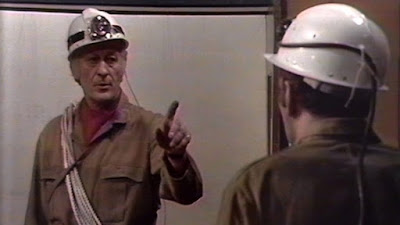 The other main strand in the episode is the UNIT party’s containment in the caves which Malcom Hulke gives a short fictional time span too in order to wring maximum tension. In truth you wonder whether the Silurians wouldn’t have just killed the soldiers rather than go to the trouble of blocking rock walls (those handy third eyes again!) but at least one of the soldiers goes a bit crazy as a result. I do feel there’s some other primal instinct that Hulke is trying to put across here because the drawings are a reversal to our ancient history as cave men but quite how it connects I’m not sure. Harry Swift wins this week’s crazy acting award for his zonked out prehistoric behaviour which helps lively up what is otherwise people sitting in caves running out of air.


The cliff hanger is an odd one too, a warning for what is to come as the infected Major Baker exits the story after trying to escape from the season’s second cottage hospital. One thing though; if you watch the earlier scene where he crashes into the conference room it is Liz who touches him and is closest to him for the longest time. Surely she, rather than Masters who is on the opposite side of the room, should be the next victim of this plague? 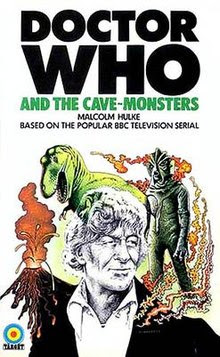 Doctor Who and the Cave Monsters


Early Target novelisations of stories would often add material to the story we’d seen on screen to give it more depth. This story’s adaptation from its alternative title in was determined to stand as a novel in its own right. It names the leading Silurians possibly to make the read smoother or maybe because it’s cooler. Hence Old Silurian becomes Okdel, the young Silurian is Morka and the Silurian scientist is K’to. The impact of this was such that, even though I’d seen the story at the time but had read the book multiple times, in my memory of it they used these names on screen.


The novel also opens with a prequel sequence depicting something of what happens when the Silurians make their decision to go into hibernation. It makes clear that before this the Silurian society lived above ground. Entitled `The Little Planet` the first chapter opens with Okdel watching the evacuation as the setting Sun catches their green scales. “Okdel wondered when he would see the sun again” Hulke writes. He goes into more detail than episode 5’s brief summary about how the Silurian scientists had calculated not that the new Moon would crash but sweep by Earth causing chaotic results. Hulke also has them reference “the little furry animals” who had caused trouble on the Silurian farms. Okdel finds them interesting but even the scientist K’to isn’t impressed “They also smell” he concludes.


What I also love about this book is the inclusion of a map of Wenley Moor showing the proximity of the main environs of the story. In those days the Target novels were illustrated and the ones in this book are splendid. They include a shot of something we don't see in the tv version- Quinn’s death scene. In the picture Miss Dawson is there watching in horror as waves of energy emanate from the third eye. The novel is full of extra bits and additions and is one of the best of the series, rather like the story it adapts.