Season 7@50. An episode mostly devoted to searching for the wounded reptile, part 3 consolidates the story without adding a lot to it. This works well due to the sweep of the search that we’re shown. These were the days when Doctor Who appeared to look expensive and expansive hence a helicopter is deployed to fly around moorland and there are even shots from it looking down over a substantial number of searchers.  The production marshals this so confidently with director Timothy Combe determined to show us the widest views and there is even a confident parping theme accompanying the search. Doctor Who has rarely seemed so solid and real as it does in these scenes. 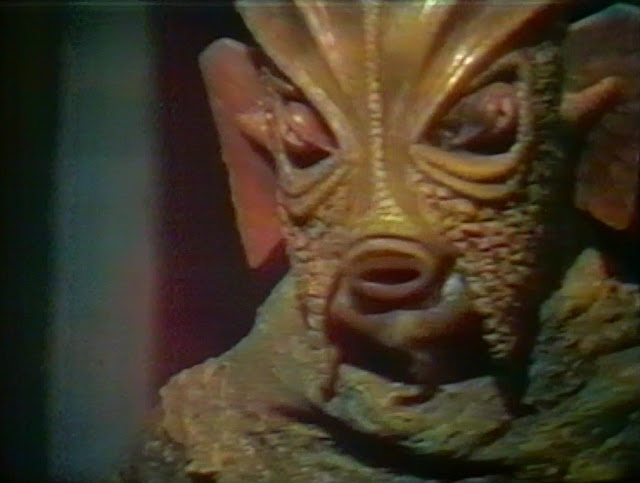 If this story had been made now I’m sure someone would market a toy based on the calling device Quinn uses to summon the rogue Silurian- it could even make that noise! The search does however present the story’s first awkward plot point wherein Doctor Quinn has to go out on the moors and obviously he is spotted and just waves to the helicopter. His earlier explanation that he was just passing when he pops in to Squire’s farm has already raised the Doctor’s suspicions. It feels the narrative is deliberately holding back here to stretch out the situation for the episode’s climax but inevitably a seven parter will tarry in this way. Luckily it allows us a little more time in Quinn’s company before he exits the story.
Fulton Mackay is a real presence in the first three episodes, Quinn’s increasingly nervy disposition being hidden by a charm he deploys. The way he enthuses about actually having been given an item from another civilisation shows how he’s losing perspective and once it transpires he’s holding the Silurian against its will to gain more information his fate is sealed. The scene where the Doctor confronts him in his cottage, especially about the heating, is so well played by both actors. 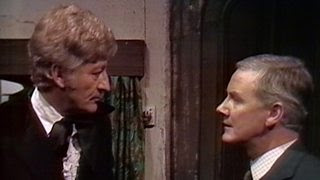 A word too about Thomasine Heiner’s Miss Dawson whose feelings and concern for Quinn I recall were expanded in the Target novel but which are clear when you watch them together in the production even though they are not really talked about. He seems to be using her infatuation with him to obtain her help.  I like to imagine that while searching Quinn’s office the Doctor and Liz also found some notes from Miss Dawson involving absolutely nothing about cyclotrons or lizards!


I really like the level of detail in this story, this episode for example there’s a great piece of detail in that scene too when they do discover a globe of the world as it was when the Silurians thrived. Also you have Major Baker still believing its foreign agents rather than walking lizards.
Liz’s injuries from the barn attack amount to no more than a scratch which tells us to never wave a pitchfork at a reptile as the poor farmer was killed for his trouble. There’s a meeting in which the Doctor’s frustrations with the officialdom he’s surrounded with become increasingly apparent yet the story still conspires to keep Liz on the sidelines. When the Doctor tells her he’s going back to Quinn’s cottage instead of her insisting on coming with, she is left to presumably continue to check records. It just shows that however wide this story casts its narrative net, the female characters are not allowed to usurp their male counterparts.
You might question how Quinn forces the Silurian into the basement but then it is later strong enough to escape and kill him; perhaps he made it a hearty meal! However the final scene is one of those classic Doctor Who moments whose effect never fades as the Silurian walks in on the Doctor and we finally see it in full. It remains an iconic, convincing costume and I’ve never understood why subsequent designers messed with it. What I’d forgotten was the remarkable camera zoom that accompanies this dramatic entrance. It’s a perfectly choreographed and presented cliff-hangar which probably explains why in 1970 the ratings for the following part 4 went up from 7.5 to 8.2 million. Well you just would tune in again next week and tell everyone else too wouldn’t you?

What’s In A Name? 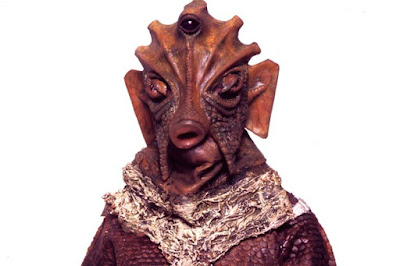 When the story was first broadcast people just accepted the name Silurians as describing the correct ecological period the reptiles would have been from. However later fan writings suggested this was inaccurate as no such land based life could have existed during that period and that they should really have more accurately been called Permians. However the script mentions their civilisation flourished “two hundred million years ago” which takes us back to the end of the Triassic period, the first period of the Mesozoic Era that came after the Permian. The Mesozoic has been called “the age of reptiles” so seems an appropriate place.
However any name we might ascribe from this era doesn’t trip off the tongue like Silurians though. `Mesozoics` doesn’t sound very good neither does `Triassics`. Mesozoica? Maybe that’s why Malcolm Hulke settled on Silurians. We should remember too that in the programme `Silurians ` is the name given by humans as the reptiles themselves lived long before we had divided and classified ecological history. Maybe they called themselves something entirely different and didn’t tell us what. You never know- one day a showrunner may reveal what that name is.