The Haunting of Villa Diodati review

Series 12 Episode 8 16/02/20. Whether Doctor Who is something of a horror series despite most people describing it as `fantasy` or `sci-fi` has always been up for debate. There are definitely moments when it strays over that divide and these are often followed by viewer complaints about an episode being too shocking for the children. Yet for a programme whose history is littered with such things as giant spiders, killer robots, animated plastic dummies and people mutating into plants that divide is often hazy. `The Haunting of Villa Diodati` definitely counts as horror at first but as it evolves takes in a few more genres as well resulting in a busy, rewarding fifty minutes packed with questions and surprise left turns. 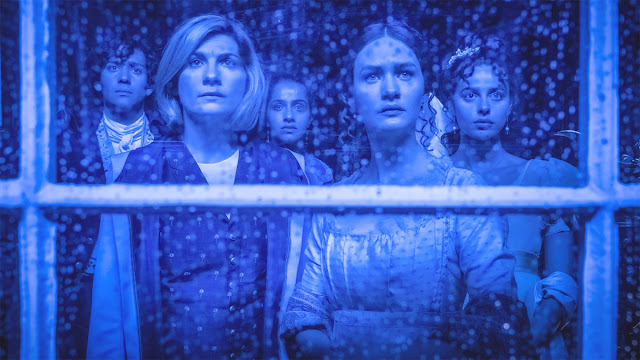 Spooky Spoilers after this point


Team Tardis turn up on a stormy night at the titular abode in 1816 where history tells us that the stellar group of Byron, Shelley and Polidori inspired each other to create some horror benchmark texts. Pretty soon though things are getting a bit random. Shelley is nowhere to be seen, paintings are falling off walls, people are appearing and vanishing again in a second while a skeletal hand is trundling about. Maxine Alderton knows her ghost stories alright but she also seems to have a handle on how to build a Doctor Who story.
The haunted house is such a familiar staple that is difficult to do anything original and initially the crescendo of scares comprises old tricks until gradually though the episode starts to move into its own space. The shock beats come sparingly at first, then the pace quickens as the characters find themselves unable to leave their location with the house seemingly turning into one of those Escher paintings (half a point off for the Doctor not back referencing `Castrovalva?).

We should be used to these big reveals which have been a much used feature of 2020’s stories but this one again surprises when the floating silvery figure in the lake that’s been spotted turns out to be a half finished Cyberman. AKA the Lone Cybermen and he’s after something called the Cyberium. No, it’s not where Cybermen keep their alcohol! Like living quicksilver, its’ presence and the mission of this sole silver giant have a whiff of The Terminator about them; in appearance Ashad looks like the Terminator at the end of T2.

The pseudo historical story always depends on how well seemingly disparate story ideas do turn out to fit together after all and Maxine Alderton mostly manages to achieve that feat. There is still a slightly contrived air in part- the idea that the Cyberium scenario coincides so directly with such a historic meeting – yet it plays well because of Ashad’s appearance. I’d guessed anyway that whatever was causing the haunting would turn out to be the trigger to Mary Shelley’s imagination but the results are better than I’d imagined they’d be. The design team do a great job on the creature's countenance taking their cue from some of the darker iterations of Frankenstein’s monster “the modern Prometheus” of legend. The real twist though is that the episode’s closing scenes do not fall prey to the over sentimentalising (or humanising if you like) of aliens which has been an increasing feature of the series since Steven Moffatt days. For once, however much we might like to think that Ashad’s sparing the baby might be a hint as to his ultimate retribution, it turns out not to be at all. He’s as delightfully nasty as he’s thus far been. The scene also shows us Mary Shelley’s boldness as she does a proto Doctor while the real thing looks on. The idea that it will be this encounter that will inspire Frankenstein’s monster is neat but I do feel we’re reaching overload on significant historical events or developments owing their genesis to the Doctor.

Often in these kinds of stories the characters get lost amidst the scares but thanks to some establishing scenes we don’t lose them as much as you’d expect. It’s a strong episode for Jodie Whittaker who’s Doctor is becoming more nuanced and less hectic. There is as much value in television drama to stillness as there is to motion and the writers are slowing her down a little this year to which the actor responds with variations; I really like her expression which says “I’m not sure about that`. I like too that she doesn’t really bother dressing in period just dons an odd looking smock under her coat!  As I mentioned in an earlier review the episodes are playing more on Tosin Cole’s strong comedic timing and now we have a more serious Yaz which suits. Graham remains our guide to the bizarreness of it all- nice to see his sandwich obsession continues while the hint that he might have seen some real ghosts in the middle of everything else is perfect.

All told though the trio of fellow travellers have not developed nearly as much as they could have. In this episode Yaz confides in feelings for (we assume) Ryan (these days it could be Graham or the Doctor of course) but have we really seen much evidence of this? Are there meaningful looks, odd little lines here and there, a moment of foolish bravery to help him? Unless I’ve missed them, no. If you’re going to have something like that brewing it needs to be evident every week, bubbling up towards the surface, not just paid lip services to in an odd line to a guest character. I feel they could have done so much more with these three- one of them could slowly go crazy or try to emulate the Doctor’s bravery (they hinted at this in `Praxeus` with Yaz) or even eat too many sandwiches! They still seem, after all that’s happened, curiously un- changed, unmoved and un-shocked. I want them to break free!

The ending means Who history will likely view this episode as simply a lead in to the finale, which would undervalue the elements that are not thus related. Yet it is true that the story would work with a different menace, unconnected to a larger story arc, and might have been better to have done so. A strong Doctor Who debut for Maxine Alderton though and I hope she’ll come back for a standalone story next time.