Series 12 Episode 6 02/02/20
After a week in which Doctor Who seemed to excite social and journalistic media more than it has for many years it is likely that this episode - which doesn’t deal at all with the momentous developments last time - will disappoint. It will probably go on record as a filler episode between the bigger ones. It is disappointing as Pete McTighe’s `Kerblam` was one of the highlights of last series. In this co-write with showrunner Chris Chibnall he takes a similar tack with a more ambitious globe spanning tale using a contemporary concern as ballast for a story. However the scenario never clicks into place anywhere near as effectively as `Kerblam` though the episode does have an unintended similarity to current news headlines.
Spoilers past this point 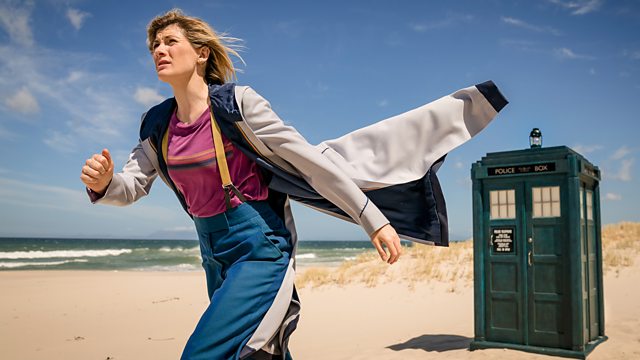 As the episode opens the regulars are already split up investigating multiple mysteries including birds falling out of the sky, a missing British astronaut and a lost submarine. These seem to be connected yet happening in Peru, Hong Kong and Madagascar. It seems to be something to do with plastic and also the sea… If you’re on the lookout for string vests or a character staring through frosted glass though you’ll be disappointed as the problem is neither the Sea Devils nor the Autons. Which is a shame really because instead we’re stuck with an alien pathogen that spreads in plastic and has come to Earth due to the prodigious amounts of it in our seas.
Plastic waste disposal is undoubtedly an important issue but I’d question whether this is the story- or in fact the programme -  to showcase it. If true the idea quoted here by the Doctor that that there is so much of this waste now that it is in everything we eat or drink is certainly alarming but I can’t buy the contrivance that it is this that has attracted the pathogen to Earth. We’re told Praxeus thrives in plastic yet surely it is a manufactured product made on Earth how has this alien virus found it elsewhere? The story would have made more sense had it been a mineral or oil and it looks like the writers room decided to highlight this topical issue and then struggled to find a suitable storyline for it. The problem with a big contemporary issue like this is that the Doctor can’t solve it because it is ongoing and this is why the programme has often seemed on more solid ground with stories set in the past which allow a fuller perspective on real issues.

Without a proper antagonist to face off against we slip back into series 11 mode with the Doctor doing (yawn) real science to sort things out. While we used to be amused by the third Doctor solving things with test tubes and coloured liquid this was a brilliant shorthand to say `complex science is being done here but we’re not going to explain the minutiae`. Now we seem to have to endure a lecture that is as accurate as possible yet dealing with a made up threat and it just does not make for interesting drama. When the Doctor is explaining all this I found my attention wandering which at that point in the story it shouldn’t be. I’m all for grounding fiction with real life events or knowledge but it needs to be done in an entertaining manner.
It doesn’t help that most of the characters are not engaging. They come and go delivering a few lines that are supposed to tell us about their life but they’re factual job based things rather than emotional. The production cares little for them; one is despatched without further comment from anyone. The reveal of Suki’s identity lacks the shock value of some of this series’ bigger revelations while travel vlogger Gabriela seems to lose interest in her fellow traveller very quickly after the latter’s violent demise. 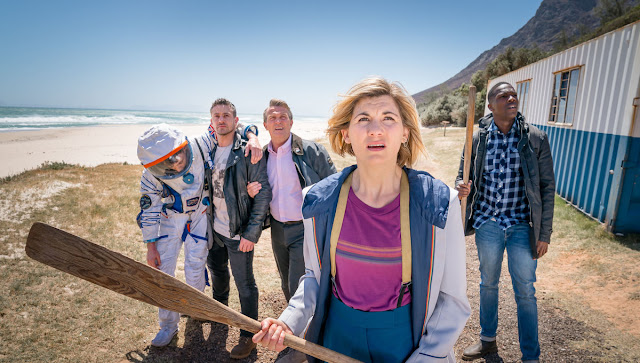 The exception are Jake Willis and Adam Lang, a married couple whose uneven statuses in life have led to Jake’s self esteem problems as Adam is an astronaut. Promising early scenes suggest this will be rewarding as an attempt to inject some emotion into an otherwise dry story. All it ultimately leads to is another of those slightly preposterous acts of recklessness the Chibnall era is so fond of. That sort of thing needs to come from much deeper characterisation than we see here.
This episode also highlights the programme’s increasing reliance on accurate teleportation and/or the Tardis to get characters from one place to another to further the plot. This makes it seem too easy. As well as budgetary issues it is why other stories stuck to one or two locations.  Yaz’s decision to just follow the alien to wherever seems a particular example of this tendency. Would she really do this? Some reviewers are interpreting her behaviour as some sort of story arc of her wanting to emulate the Doctor but if so there’s been little previous evidence so far.

We can usually really on some visual balm and South Africa gives good value providing several different locations however some of the effects seem a bit below par. There are some less than convincing CGI swarms of birds and we see one bird from behind that looks like a puppet. The infection itself is depicted as people turning into chalky rock but it is so obviously CGI it doesn’t quite work when we see it spreading. However the deaths are shockingly done and so sudden too.
Jamie Stone’s energetic direction contrives to make the episode more exciting than it is and the vibrant outdoor locales liven things up but when the narrative stops for dialogue interest wanes. It says a lot about the story that after watching it I am still much more excited about `Fugitive of the Judoon`. `Praxeus` is not bad in some respects but feels like a throwback to series 11’s style which this year has till now left behind for better things.