Ascension of the Cybermen review

Series 12 Episode 9 23/02/20 Reviewed by Matthew Kilburn
Ascension of the Cybermen is ‘about’ narratives and their ownership. It teases with an opening narration through which Ashad, the Lone Cyberman, frames the story which follows as his. The discovery of the title sequence within the eyehole of a detached Cyberman head might suggest the Doctor’s victory over the dead Cyberman, or alternatively that only the Cybermen, in their undeath, survive to tell this tale. As the episode unfolds, this question of ownership of the narrative is raised again and again. Whose story are we watching? Whose story is Brendan’s, from its mythically golden morning to its dully nightmarish twilight? It’s left uncertain where his reality lies. The Doctor and friends arrive specifically as visitors to the end of the Cyber Wars, there to make sure the last humans survive and frustrate the recreation of the Cyber Empire, but are swept forward in a small, final refugee wave as their scheme is frustrated, struggling to retain possession of their destinies.

Characters assert agency and make decisions for their own survival, only to find more terror and ever more limited options; unless, of course, they are a Cyberman. For a Doctor characterized in her first season as a Doctor of Hope, this is a bleak tale of foreboding. The author is Chris Chibnall, and in depriving his characters of much of the illusion of autonomy, he is letting his audience know of his presence; or is he represented by the Master, lord of substituted orders? 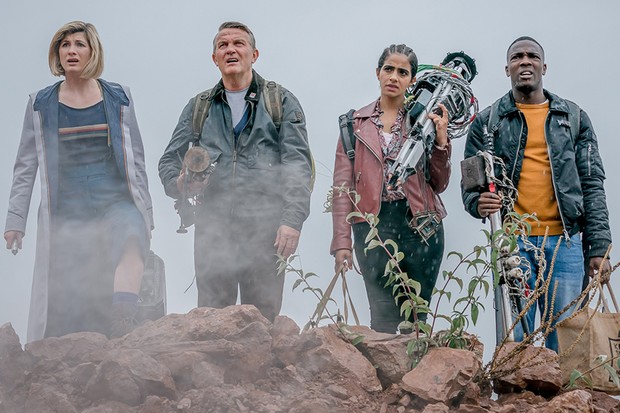 The Brendan narrative aside, Ascension of the Cybermen is bookended by ruins. The Doctor, Graham, Ryan and Yaz meet the surviving humans at what looks like a smashed electricity installation, monumental insulators in fragments recalling Shelley’s Ozymandias, though the surrounding landscape is too flourishing to be a desert. More appropriate to Shelley is the wasteland of Gallifrey, its shattered dome and broken test tube towers presiding over dust and ashes, but the author of its destruction is not time but the Master, to whose purple outfit my prose does not do justice.


The Haunting of Villa Diodati pointed forward to the finale more than we knew. Ascension of the Cybermen is a ghost story, of species clinging to existence who are meaningfully dead but still haunting the universe sustained by faith. Humanity has faith in the Boundary as a final destination beyond which lies a world free of Cybermen. The Cybermen are an army led by a fanatic who thinks his aborted conversion is a test of faith and who remakes his followers in his image. Ashad is capable of extreme violence which hurts to watch even when the victim is a Cyberman, understood by this series as a mechanically reanimated corpse. There's an underappreciated grisliness in Chibnall's Who which stretches back to T’zim Sha and his murderous dentistry, and it is displayed here.

Jamie Magnus Stone has achieved the most this year with wide-angle action scenes, though arguably he is the only director to have been briefed to seek cinematic scenarios this year. Nevertheless there is a marked ambition in this episode's visuals which was absent from some of the other large canvas episodes, apparent in the human settlement scenes even before the Cyberdrones arrived. The detail of the Cyberbattlefield and the troop carrier both impress as stark images of brutality and brutalism, the latter both inside and out. Presumably the gravraft is Cybertechnology too. It fits into the troop carrier’s docking bay comfortably despite the drama of the raft’s tumble towards it.


Jodie Whittaker’s Doctor began by preaching non-violence and practising minimal interventionism; now she arrives with her three associates hauling Cyberman-destroying weaponry. This effectively emphasises the apocalyptic nature of the current threat, if underplayed by the fam’s matter-of-fact near-levity about the devices’ operation. The jolly tour of exotic destinations seen in Series 11 and resumed in the earlier part of this series is echoed, but it has been overtaken by fighting the most terrible things from some corners of the universe, just as always. With this Doctor the rediscovery of mission has seemed a long process, as if the viewer is expected to want to share in the lead character’s denial and be satisfied with the imperfect small-scale solutions which annoyed many in Series 11.

On occasion, this series has seemed concerned with the loss of innocence. If so, it’s been an innocence assumed by all four of our travellers, all of whom are running away from something in their different ways, looking for guidance in or escapes from a complicated world. There has been a strand of the hearty northern lass in Jodie Whittaker’s Doctor, reminiscing about old hangovers, but she admits when trying to hotwire the Cybership that her misspent youth is a hellraising loosely translated from experiences which aren’t directly comparable: “Not that we had weekends. Or teenagers.” Ethan is or has been a teenager and is suddenly both more authentic and more efficient than the Doctor, whose proper sphere is higher than human (as she noted in The Haunting of Villa Diodati). The scene largely serves to give some strength to Ethan following his separation from the other humans, but it also stresses this Doctor’s fragility. Wisecracks about her own abilities can’t solve everything, but learning from other people can. This might be what the presentation of the TARDIS crew as a flat-structured team has intended to emphasize. Amidst its presumed dismantling, a theme of the early Chibnall era is still alive. 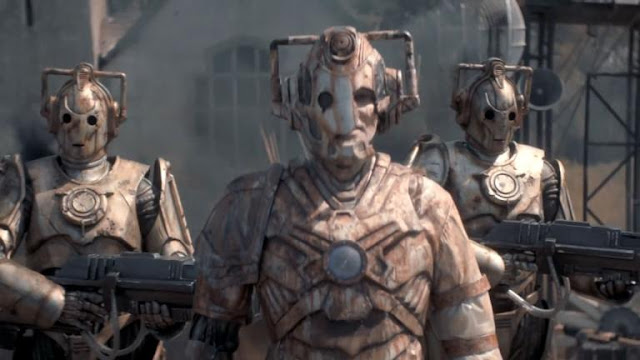 Chris Chibnall's era of Doctor Who makes references to backstory stripped away under Moffat and Russell T Davies, while resetting some of their innovations. Gold is taken seriously for the first time in the modern era as a way of dealing with Cybermen. Even so, Ravio seems doubtful, as if Yaz is repeating hearsay, an in-text acknowledgement of how the idea of a uniform narrative of Doctor Who is undermined by contradictions and contrasts in content and tone. While the Cybermen here speak in a voice devised by Nicholas Briggs for their revival in 2006, their language intermingles the ‘delete’ cries of the Cybus Cybermen with the deference to a leader associated with the Cybermen of the 1980s. After over a decade where uniformity has been a defining quality of a Cyberman, allowing a leader personality becomes frightening in itself. Patrick O’Kane’s Ashad is something of a commentary on David Banks’s Cyberleaders, especially that of Attack of the Cybermen; blind faith arising from a closed logical system is replaced by the more dramatically engaging concept of faith in ‘ascension’ to a higher plane. Viewers might be reminded of the more recent case of Bill’s conversion, but here the change is a willing one and the Ashad’s visual image is more complicated and, heavily engineered one; not so much a medical nightmare as one of military technology. There are physical similarities to another cyborg seeking purpose in twenty-first century Doctor Who, A Town Called Mercy’s Gunslinger, though the characters’ aims are opposed.

Ashad’s renewed Cyber war is a blend of cultural and religious conflict. This raises questions about the location of the Brendan narrative in Ireland, associated with sectarian warfare in Northern Ireland for Chris Chibnall’s generation. How far this analogy can be drawn is debatable without descending into the dangers of cultural chauvinism, clichés of British Protestant materialist Cybermen oppressing the communitarian, natural Catholic Irish, perhaps; events in The Timeless Children might show how much mileage this analogy has. More relevant, perhaps, are memories of where officials thought Gallifrey was in Bob Baker and Dave Martin stories in the 1970s, as did Joan in 2007’s Human Nature. The abandoned baby recalls the discovery of Professor Yana as a child – and post-Civil War Ireland might have been to some a silver devastation – but also Moses in the bulrushes, teasing parallels with both the Master and the staff-bearing prophet Ko Sharmus who has led his people to the edge of the promised land, but can’t or won’t join them. Brendan's name is that of a saint whose legends include a sea voyage in search of the Garden of Eden, much as the fleeing humans are looking for a safe haven beyond the Boundary. He's also a Kal-El adopted by the Kents, a shockingly invulnerable superman, but one whose abilities are public and hide in plain sight. The in-period technology which erases Brendan’s memory nevertheless recalls the chameleon arch of Human Nature and Fugitive of the Judoon. The mysteries of the police station, the uncertain narrative and its relationship with death all recall Flann O’Brien’s novel The Third Policeman (1939-40, published 1967) The mythology of Doctor Who is drawn on as part of a multiplicity of cultural allusions. The parallels with the Doctor, who wants to serve, are obvious. The seemingly artificial setting reminded me of Star Trek: The Next Generation's The Inner Light, but where Picard's implanted memories were kept, Brendan's are removed painfully, though he goes to be sacrificed like a lamb. Religion, again, stalks this tale.

The conclusion of the episode is too drawn out to serve as a true triple cliffhanger, but underlines the question of narrative ownership raised earlier. Brendan remains a frustrating mystery detached from the rest of the episode. Yaz and Graham’s plight is highlighted and then put to one side. A thread about the escape of humanity is left hijacked by the Master who, as at the end of Spyfall Part One, assumes the role of author, congratulating himself on pulling off this twist and letting viewers and Doctor know they are in for worse to come. The more convenient narrative decisions this episode could even be excused as set-up by an in-text manipulator, such as three Cybermen arriving in two spacecraft so one can conveniently be stolen, and the abundance of oxygen on the Cyberman troop carrier. Around the edges of the episode, the trailer sees the Master refer to his ‘work’, again recalling Shelley’s Ozymandias but also suggesting that the Master wants to be appreciated as a creative artist.

The Master’s tissue compression eliminator, as reintroduced in Spyfall and seen in publicity photographs for The Timeless Children, even looks a little like a hand-held cinecamera. If the Master is a would-be auteur, then it’s tempting to view Ashad as a parody of a Doctor Who showrunner, possibility-challenging amalgamation of superfan and industry professional, inhabiting both worlds of myth and media reality. Chris Chibnall seems to have embraced these apparent contradictions more readily this series than he did in the last, like Ashad setting course for Gallifrey. Again, conclusions await The Timeless Children.

Though impressive as a series of visuals and mysteries, Ascension of the Cybermen works best if viewed as the point where several stories meet rather than as a self-contained tale in itself. Arguably, in these days of prestige serial drama and box sets, this is a direction which Doctor Who could more usefully explore than it manages now, where the distance sought from the arc by some episodes might alienate viewers rather than overstretch them. Quests are about to converge, but has the spy Master become a station Master, changing the final destination? At the time of writing, there’s less than a day before we find out.
Posted by John Connors at 14:19