Season 12 Episode 1 01/01/20. "Everything you think you know is a lie.” This teasing line from an energetically propelled episode just about sums up the world today and if real life is crazy then surely fiction has to be crazier? This is a pitch- and a strong one too- to be a classic Doctor Who story and while we’ll have to see part 2 before we know the signs are good. It almost feels like the Chris Chibnall era starts here! It is far and away the best episode of his stewardship and also his best script for the series. After a tentative yet not always thrilling debut season (which nonetheless had its moments) last year’s special `Resolution` seemed to finally get the engine running albeit cautiously. In the twelve months since something strong must have been in the tea because `Spyfall` Part 1 is an outrageously bold attempt to re-connect those adventure synapses lying dormant since, yes, `The End of Time`. Modern Doctor Who really does work when you loosen the atmosphere a bit, go with a big concept that can be summed up in one sentence and then shove in a surprise for longer term fans. The results are an exhilarating opening episode.
Spoilers aplenty past here..

Despite their wholly different scenarios the episode most reminds me of `Voyage of the Damned` which similarly borrowed from a genre to make an enjoyable pacy adventure that also threaded in well with the Doctor Who lineage. Chris Chibnall has been criticised for a lack of depth in his stories, whether he wrote them or not, but there’s a bit more meat in this episode. Clearly recent developments relating to privacy laws, global corporations’ omnipresence and social media work their way into the script and it sets the episode neatly up as of its time. As for the title there are certainly plenty of nods to James Bond lore with the gadgets, luxury house, tense downloading of information, car chase across a vineyard and Barton’s high tech HQ. However its not really as much of a James Bond spoof / homage as I was expecting though top marks for the card game gag!


I suppose it shares with 007 the speedy developments and action beats that propel our heroes from one jeopardy to another and it also riffs strongly on the all encompassing worldwide threat that Russell T Davies used to and weaves a chaotic narrative around it. In this cases spies worldwide are being attacked after which their DNA is re-calibrated. Presentation wise the boat is really pushed out to create a global scenario with multiple locations doubling for other locations giving the whole thing a reach most Doctor Who never attains. While last series’ `Kerblam` was inspired by Amazon’s ubiquity the targets this time are the likes of Google and Facebook with Daniel Barton presented as having Zuckerberg like ubiquity.


Lenny Henry gives a controlled performance as Barton resisting some of the more obvious Bondian tropes which considering what’s around the corner balances the episode well leading us- and the Doctor – into thinking he’s the big villain. We have another top drawer guest in the form of Stephen Fry though he is gone rather soon. The now established regulars are also properly fired up now so we see consequences and real concern amongst them- Yaz’s surreal experience is treated as something that really scared her rather than something to be forgotten after a moment of banter. The Doctor is much less dominant in every scene with Jodie Whittaker finally being allowed to show a wider range as we all know she can. Last year’s sometimes forced wackiness and dropping into a lecture seem a long way off. It seems though that as ever writing for three companions is almost impossible. This time its Graham who gets little to do except provide a witty narration of events. 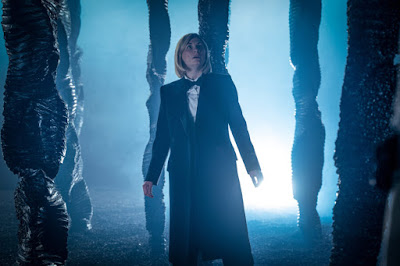 The aliens themselves, identity as yet unknown (some have suggested Voord or Krotons but its hard to see the appeal of a return visit from either) are visualised as glowing white light beings with triangular heads (I think this is where the Voord rumour comes from) though state this isn’t their actual form. They inspire several stand out sequences notably when the Australian house is under siege and a simple trick of lights going on and off creates a superb tension. We have them melting through walls and out of paintings and even through metal. More than what they look like though is the fact that in the hands of director Jamie Magnus Stone they become a palpably dangerous threat. One of my bugbears about the last series was a lack of really dangerous antagonists. Its why I cheered on `Kerblam` as the only episode where anyone really seemed to be in danger. This episode on the other hand lays on the danger with a trowel and together with the even pacing makes for a thrilling rollercoaster of a tale.

When the speculation about who the next Doctor would be was floating about three years very near the top of my list was Sacha Dhawan. I knew he had the versatility and energy to do pretty much anything and of course that has to be true of The Master too. Remember John Simm’s performances? Well now the latter seems to have a rival for the most unhinged yet lethal version of The Master. With echoes of the end of `Utopia` the reveal that hitherto mild mannered agent O is actually The Master is handled with enough melodrama to give you goosebumps and Dhawan tears into the role with gusto, mixing adult menace with a childish delight in the mess he’s making. 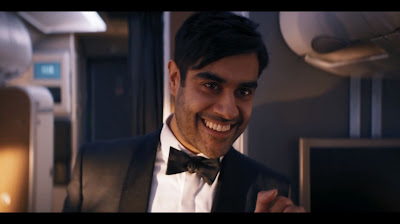 The Master is generally a reflection of the Doctor anyway drawn from the same tv landscape, the same writers’ imaginations. Hence Roger Delgado was a suitably suave foil for the velvet cloaked Jon Pertwee, John Simm matched David Tennant’s boundless energy with his own dark version of the same and they even gave Peter Capaldi a fellow Scottish best enemy. Hence Jodie Whittaker has a Northern Master to contend with and make no mistake she will be challenged both fictionally and theatrically. Sasha Dhawan can match her for range and willingness to hurl himself into anything. It is telling that this is the first episode she’s done where she doesn’t totally dominate the narrative. This is partly because as mentioned above the writing has rebalanced to give others more but once Dhawan is on screen- whether displaying puppy dog enthusiasm as O or sheer childish menace as The Master- he is terrific in either aspect. Hopefully the two  will get plenty of screen time together. As to how he got here and is back in full on enemy mode after Missy’s apparent redemption I’d suggest that this may be a Master from another time line altogether or perhaps the aliens saved Missy? Does it really matter? I’m reminded of the Eighties when the conversation usually went “So you escaped from (insert name of planet)?” “Yes Doctor” “OK then.”

Just like `Utopia’s pocket watch in plain sight there are clues as to what’s going to happen- O’s apparent obsession with the Doctor taking up a whole shelf of files (and the fact he had paper files despite his multiple pc screen display), the trademark hexagonal pattern of his forcefield, even that he could muster a forcefield like that. It was also interesting that nobody knew the actor he was in the episode as he was left out of the cast list and all pre publicity including a photo from a scene he’s in.  What was that about everything you know being a lie?! All of which lifted an already great episode into a potentially classic one. As if all this isn’t enough the episode ends with a cliffhanger of considerable peril. `Spyfall` Part 1 is an excellent series opener mixing thrills, seeding clues and including a big surprise. There’s a lot of questions to answer in part 2 of course but so far this is shaping up to be a great story.