Season 7 @50. Watching an episode a week you can see this is a slim storyline which has an unfinished or rushed sense to it. The way the Doctor and Liz knock up a machine overnight seems too perfunctory with the resulting device not being convincingly strong enough to defeat such a powerful creature as the Nestenes. What actually even happens there? How do those globes help `create` the Nestene? The concept of the globes suddenly seems out of kilter with what we’re seeing- we’ve been told this final one is the Swarm Leader but its just a globe like the others and the Doctor has worked out that it contains nothing sentient. Channing places it on a receptacle and some noises happen. We see something moving in the front of the glass tank yet the tentacles that later emerge are surely the wrong scale for the whole creature? The thing is there’s been plenty of time and opportunity to smooth out these edges. 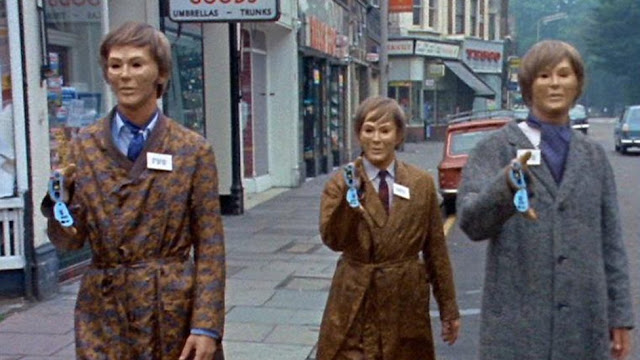 Equally sudden is Hibbert’s realisation that he’s been on the wrong side all this time; after less than a minute away from Channing’s side he turns though in fact the latter is just outside. Surely Hibbert spends a lot more time on his own in the factory and it would have made a much more satisfying arc for his doubts to surface earlier, especially as there’s space in part 3. After all he’s seen does he really think he could defeat Channing simply by bashing a control panel rather unconvincingly? Surely his doubts would bubble, he’d flee the factory and impart some key information to the Doctor enabling the victory? Also would Tussauds really commission a tableaux of obscure civil servants to sit in a display with the likes of Gandhi?


Following accounts of Autons emerging worldwide, UNIT are able to enter the factory not meeting any resistance till they’re well inside. Soldiers follow the fake Scobie without even thinking how odd he looks. Disappointingly Channing gets an off screen demise while the Doctor wrestles with some rubber tentacles, not an auspicious sequence for the new incumbent.


Then again there are some classic sequences in the episode that have lost none of their power over five decades. The visual and musical twitch when the mannequins wake up still makes you jump. The renowned scene of Autons stalking the early morning streets is one of the best of its kind, eerie and exciting at once aided by some gymnastic deaths of pedestrians. The brief montage of Autons firing and running feet is particularly effective. There’s a great battle scene in the factory grounds while Hugh Burden is convincingly intense as Channing’s confidence grows. 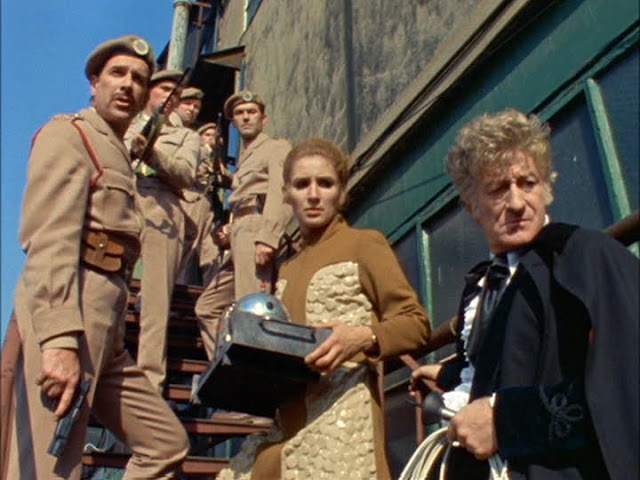 I wonder what 1970 audiences made of the new Doctor by the end of the story. Unlike today when a new incarnation dominates their first few episodes, Jon Pertwee has little to do in his introductory story. After spending much of the first half asleep, the rest of the time is mostly pootling about in the lab. There are some good moments with the Brigadier and then a bit of action at the end though this doesn’t come over too well.  The third Doctor after four episodes is therefore still a vague creation. Flashes of childishness that work well here are soon phased out and it’s a shame he doesn’t get to keep the red car which goes better with his wardrobe. As others have observed he will become the most human-like Doctor till David Tennant which certainly suits his mostly earthbound adventures. Here, despite talk of two hearts and so forth he doesn’t seem very alien or odd at all.


Liz is equally sketchily defined. Later on when Romana was in the series the issue of two very clever people at the helm was offset by some witty dialogue but with the third Doctor and Liz its mostly dry scientific exchanges. It is easy to see why after viewing this and looking at the other scripts for season 7, Barry Letts and Terrance Dicks would opt to take only the surface elements forward in a bolder, more colourful manner.


Whatever the flaws in the overall story the Autons themselves made quite an impact- I once remember someone describing people as “like Autons” years later which shows how well remembered they were. Ultimately though Spearhead is more a collection of good ideas rather than a good story well told. Its signature scenes together with the concept of the Autons are peerless but the narrative can’t quite deliver its full potential. I’m not sure if the writing process was rushed through necessity but it comes across as one of Robert Holmes’ less detailed stories despite its undoubted highlights and significance in the canon.
Posted by John Connors at 14:28 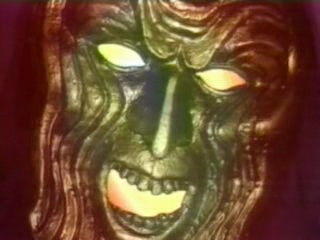