Season 7 @50. Meg Seeley is not be trifled with. While earlier in this episode Ransome runs in total terror from an Auton, Meg’s reaction to our plastic pal’s incursion is to reach for her shotgun and let loose both barrels. Never mind UNIT, they should send her down to Auto Plastics to sort the situation out. Even the Auton, which happily fired at Ransome, doesn’t kill Meg on the spot as it could easily do but seems to just knock her over. On the upside, her husband’s light fingered tendencies mean their cottage will soon have a full stock of replacement items for all the damaged furniture. A curious collection of scenes, episode 3 confirms the story’s slender narrative has room to spare as you realise that most of the well remembered moments are actually in the other episodes. 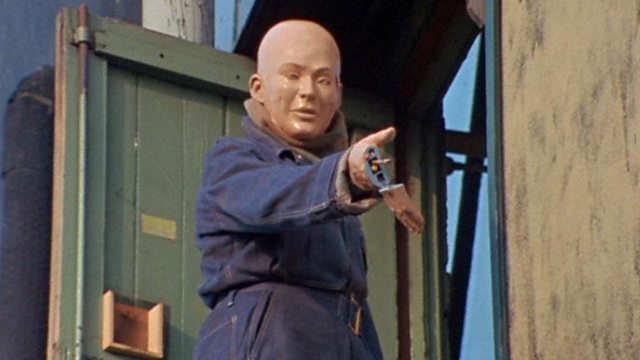 This instalment marks time by having Meg’s other half Sam teases Captain Munro about them “thunderbolts” as the increasingly weary officer looks fed up with his lot. Sam is not just wasting UNIT’s time, he is also wasting ours! Elsewhere there’s space for some frivolity as the Doctor persuades Liz to get the Tardis key. Thus she walks into the Brig’s office when he’s talking to a rattled Ransome about relevant issues. Not that Liz bothers to take notice concentrating on swiping the key to enable the Doctor to try and disappear into time and space. Of course he can’t and re-emerges in a plume of smoke. At least it is proper smoke. Whenever the Autons fire there’s a puff of odd brown smoke and this became the default colour for larger explosions in the third Doctor era. Perhaps the production team thought it was less realistic? Trouble is it lacks any force and resembles a theatrical flashpot.


There is also more space given to General Scobie whose upper crust accent makes the Brig seem like a yokel by comparison. As if a serving and presumably busy senior Army officer would find time to pop into a plastic factory for hours to have his face mapped for a plastic dummy. It does give the episode a memorable ending though as he comes face to facsimile on his doorstep. I wonder what Scobie does on the side;’ surely even a decorated career would not pay well enough to afford the grand house where he lives without seeming to change out of uniform!


So does anything important happen in part 3 then? Well partly thanks to Meg’s gun toting antics UNIT have the Swarm leader globe which the Doctor handles as if he’s about to throw on the floor and have a kickabout with. Channing and Hibbert spend most of the episode staring at a screen but is that perspiration on Channing’s forehead? Is he melting? It is from their games console that they ensure Ransome’s demise. “Destruction. Total destruction” says Channing intently which seems a little harsh especially as nobody else suffers this double whammy. 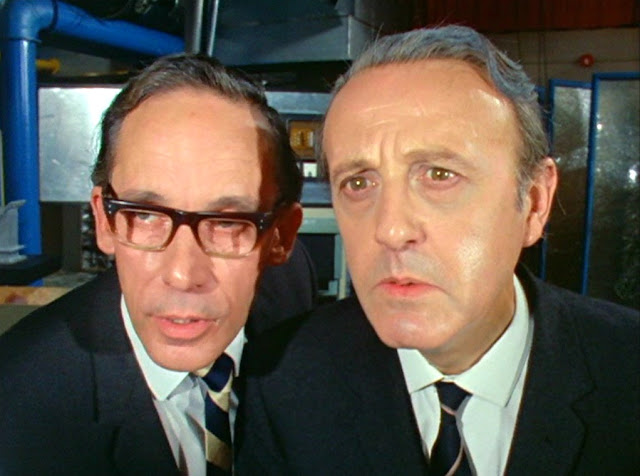 Thus Ransome and his flexible face are gone in two puffs of brown smoke. If the timescales Ransome had spoken of are accurate then it makes Channing’s plan quite impressive. In less than six months he has changed most of the machinery, made it look like its 30 years old and arranged numerous deals with shops to buy their window dummies and taken over the Madame Tussauds contract. Lord Sugar would be envious.


The bit where the Auton uses its plastic hand to scythe through the back of the canvas tent is one of those things from the classic series that made kids run behind the sofa. On the whole though, the Autons remain variable. In those days there was no movement coach so while the one we see at the Seeley’s walks stiffly and economically he suddenly breaks into an athlete’s run when ordered away. It also has a curious way of searching- even though the signal is clearly coming from the shed, it ransacks the house opening drawers into which the globe would not even fit. Does Channing just not like the Seeley’s furniture?  Is he looking for a packet of crisps?


All told Part 3 is a luxurious indulgence during which the narrative barely moves a jot but it keeps you entertained anyway.