Season 7@50.
Remarkably it is fifty years – half a century! -since Jon Pertwee debuted on screen as the Doctor. A new Doctor is a tricky proposition for which there are two ways to go. One is to make them totally eccentric and over the top, the other is to have them largely sleeping establishing the other characters before the Doctor wakes largely fully formed. Given that the season 7 team had to establish a new format they wisely plumped for the latter. It does mean that Jon Pertwee has little screen time save for scrambling about trying to find his shoes though when he does get the key hidden in them there’s definitely a Troughtonesque look on his face. Other than that we don’t really get much chance to say whether we like the new Doctor or not.

Caroline John’s debut is also quite low key in keeping with her strict rather cynical character. She seems a little prickly though to be enjoyed are the actor’s increasingly incredulous reactions to events.  Liz doesn’t really get a lot to do here leaving the stage clear for another excellent performance from Nicholas Courtney though he does have the advantage of two previous stories to establish the character. He really is a master at selling the more bizarre elements of the show with a raised eyebrow and a commanding presence plus is one of the best `on the phone` actors there ever was! Though its not especially funny both he and Caroline John play their introductory scene, as the Brig slowly draws Liz into the mystery, with precise sitcom beats.
Hugh Burden makes an immediate impact despite not having a word of dialogue; what other story has the antagonist standing behind the principals in the manner he does at the hospital lobby? I’d forgotten how expressive this performance is as we tend to remember an impassive Channing staring into the distance. In this episode though he seems alternatively intrigued and when the Doctor escapes before he can be loaded into the van a bit irritated. The way he stops the Auton from running after the errant Time Lord instead pointing at the van suggests the line “In the van, idiot!”
The other characters are a broadly sketched but interesting collection of medical staff, soldiers and yokels. There’s a marvellously rustic turn from Neil Wilson as sneaky poacher Sam Seeley whether gathering up one of “them thunderballs” or exchanging pleasantries with a casual soldier who calls him “Dad”. Talfryn Thomas’ enterprising Mullins is also good value (would a hospital porter do the vacuuming though?) while Antony Webb convinces as the harassed Doctor Henderson. 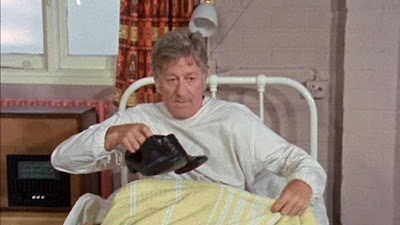 The mysteries contained in the episode are well known to viewers who will not be surprised that the alien Doctor has two hearts or a completely different cardiovascular system. Thus its the medical staff’s reaction to them that entertains’ and there’s a little more of this in the Target novelisation whereas here we have to be content trying to guess if Jon Pertwee does the voice on the phone raging about the blood sample! (He doesn’t – its Ellis Jones). Now we’re more familiar with the faster rhythm of modern Doctor Who these old stories can seem sluggish but there is very little you could cut from what is an economical and to the point episode.
Its well known that outside issues meant the entire story had to be filmed in location and this proves an advantage providing more options for director Derek Martinus than any set surely would. The result allows the episode a distinctive identity later memorably utilised for a trailer heralding a repeat season in 1999. The building used for Ashbridge is not large but enables what must be the longest corridor walk ever in 70s Doctor Who! Alternatively Martinus chooses to take the camera right into the heart of the melee as the press hassle the arriving Brigadier for quotes. One particularly effective moment is when the Autons turn up to take the Doctor; the audience’s point of view remains on Henderson as we hear footsteps and then see the briefest glimpse of a shiny faced Auton knocking him out. Though the colour palette is a bit washed out the director definitely adds a filmic dynamic to matters and even something as ordinary as arriving vehicles are shot as if on the big screen. Additionally the majority of people watching would still have had a black and white tv so the colours wouldn’t matter so much.   Dudley Simpson’s incidental music compliments so well being straight out of a spy thriller.
This melodramatic approach can misfire though; the opening scenes with the technicians monitoring the approaching meteorites over emphasise the heatwave with actor Ellis Jones’ rather overdone sweat which looks as if someone recently chucked a bucket of water over him! Perhaps it was his severe unsweating boss?  Also the arrival of the Tardis is done by a less than convincing model shot  and the model looks different to the full sized prop. A shot of the arriving objects makes them look far bigger than they turn out to be. The ending too is rather silly as it is clear to us that the person in the bushes is a civilian which means UNIT are rather trigger happy to say the least. However I don’t think it was even a spoiler in 1970 to confirm that in part 2 the Doctor does not regenerate again! 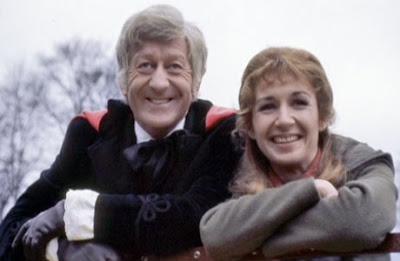 Robert Holmes on Spearhead from Space- “A glob”
“It was about the time plastic was coming in, in a really big way – it was everywhere. As there was so much of the stuff around, I thought it would be effective to have an alien force that inhabited and used it……The Nestene itself I thought of as a plasticky, swirling mass, a glob of pure instinct which spawns the Autons. The Autons come from the word autonomous, because although they were formed from the Nestene element, they weren’t a part of the host form. I started the show with a swarm of meteorites landing, because in ‘Doctor Who’ it’s very rare to actually see the alien land. As this was to be a season set on Earth, I thought it would be a good grab to open it with.”
Posted by John Connors at 08:01