Series 12 Episode 3 12/01/20
Ed Hime’s debut story `It Takes You Away` was a curveball in an otherwise straightforward series so its surprising to find his sophomore offering sticking to a more familiar set up. `Orphan 55` is fast, sometimes too fast, with excellent visuals and becomes more interesting as it goes along though the guest characters don’t get enough of an opportunity to shine. Neither classic nor clunker it is a good, solid Doctor Who story that leaves the viewer with something to think about at the end. It feels both very Now yet also quite traditionally Doctor Who. The fact that it seems to have generated more chatter and differing opinions than `Spyfall` suggests it may be a story that grows in reputation over the years.
Spoilers after this point 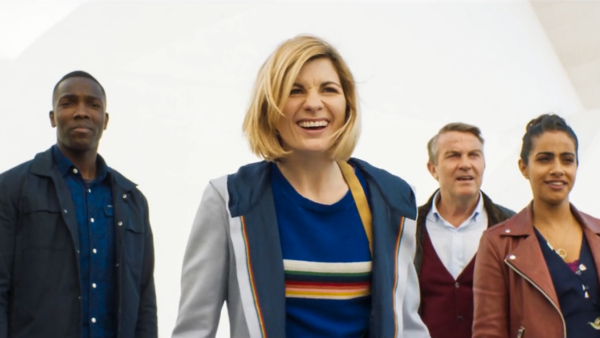 As any Doctor Who fan knows holiday planets are unlikely to be the relaxing havens advertised and Orphan 55 –to which the Tardis crew are whisked when Graham wins a competition - is no different. Its wide corridors, poolside seats and positive vibes are soon interrupted by invading monsters. As the systems that hold the place together go offline, its true nature is revealed and creatures called `Dregs` are breaching the perimeter raising the body count by the second. The opening section is the least involving as the place never looks convincing as a holiday destination though this may be deliberate given what develops. There’s nothing that we’ve not seen in different variants before. We’re quickly introduced to some fairly generic characters whose fate the viewer will already be mulling. I feel as if the episode wants to get to the action as quickly as possible meaning that key revelations are later despatched in the midst of the danger by which time its too late for us to really feel for these people. This particularly affects Bella, whose hidden agenda comes to the fore when its revealed she plans to blow up the whole place. Quite how her multiple bombs were teleported there when the Tardis crew are whisked off without baggage is not clear. Her motivation for such an act doesn’t convince either as its rushed into a busy scene.
This extends to other characters too; at times it feels like the cast were only given their lines moments earlier. The elderly Vilma and Benni and the father Nevi and young son Sylas are both potentially interesting duos but there is no time in the episode to get to know them. There are some strong emotions evoked - a long term couple finally about to wed then cruelly separated, a father whose engineering skills are eclipsed by his pre teen son, an estranged daughter taking desperate action- but these are not delivered with anything like the force they should be. You can’t help but compare the situation to something like `Waters of Mars` wherein another group of people are trapped by seemingly impossible odds and as they are picked off each death feels personal. I was riveted by that story and have been on re-watching it but somehow `Orphan 55`’s characters do not engage in anything like the same way. Plus some of this episode’s characters have a tendency to make sudden self- sacrifices which are supposed to be noble but come across as un-convincing. I’m not sure if it’s the script or the editing but these are good actors whose time on the show should have been much more interesting.

It’s a strong episode for Jodie Whittaker though whose performances this year seem much more varied than the constantly upbeat chatty approach of her first series. She still talks too much giving other characters little room- this was true of her two predecessors in the role as well- and thus the guest cast have meagre pickings. Julia Foster fares the best with her unrelenting search for missing fiancée Benni being a driver for much of the plot. It is refreshing to see older actors incorporated into the programme. James Buckley and Lewin Lloyd (the latter a standout in His Dark Materials) are given very little material and for some reason silly looking green hair. A putative romance between Bella and Ryan is also rushed and never gets going which is a pity as there seems to be a good on screen chemistry between Tosin Cole and Gia Re. Kane is a very thinly drawn character, her motivation poorly devised and she seems to take actions solely to advance the plot. I know that’s how things are written but is shouldn’t be so obvious in the finished version.
I wonder if the development of this episode was rushed as the problems with it are actually quite small but make a difference to the way it plays out. Personally I would have cut two of the characters out altogether, had the Tardis `fam` already there for a couple of days and slightly reduced the incidents to allow more character stuff. The fact that Kane is Bella’s mother would also have gone so you could re-write her objections to the place to become something else. Give Nevi and Sylas a bit more screen time and amp up the Ryan/ Bella relationship.
It’s a shame the characters are so weak as the external threat facing them is very strong. In recent years we’ve missed growling monsters and here the Dregs prove to be a fantastic addition to that tradition. The sequence were dozens of them mass outside the Dome is a classic moment to match any similar scene from the series’ history. When we learn of their origins (though the name is a clue) it gives them an unexpected additional power. Visually the episode regularly hits such heights and Lee Haven Jones’ direction emphasises the increasingly narrow odds the survivors face. The editing is razor sharp with just enough to show the danger without any gore.
The question about stories with a twist is how well they will stand up on a second viewing once you know what the twist is. When the reveal comes that this planet is actually a future Earth riven by the effects of climate change the episode pivots from being a remote fantasy to a contemporary warning.  It did look like the flashback though when the Doctor goes into the creature’s head seems to show war rather than climate change caused this. Perhaps to underline the point they could have had someone discover some old crackly footage of a half human/ half monster warning the future.
People surprised by such an overt reference to current events have not been paying attention to the series which has over the decades often made such parallels notably during the Third Doctor’s stories, `The Green Death` being the biggest example. The best Doctor Who always has a bit more. Some find this intrusive but I’d say the reverse is true. If you want to engage a wider audience then you need to talk about things they will understand whether by allegory or more directly with future predictions as they do here. The Doctor gets to deliver a speech about how the future is uncertain and up to us and could be addressing the news of 2020 as much as some far flung future. This is the most satisfying aspect of the episode adding substantial ballast to the narrative. The Doctor’s line about arguing about the washing while the house burns down is particularly striking.
`Orphan 55` has great monsters, knife edge tension and a strong relevant message but populating it with under developed characters means it falls frustratingly short of its overall potential.