CT's 1983 editor Gordon Roxburgh did not have a way with headlines. Or perhaps he just didn’t have a lot of letraset. The July edition has the headline `Return`. A big picture of a Dalek sort of gives away what is returning but couldn’t he have at least managed something a bit more dynamic than `Return`. He does go on to describe `Destiny of the Daleks` as “dreadful” too which it isn’t. Tucked away deep inside the issue are the results of the 1983 season poll. It seems an oddly quiet way to declare them especially as the editor has said on the cover it is a slow news month. He probably didn’t have enough Letraset to add the story `Mawdryn Triumphs in Season Poll`. Yep by a margin of almost a thousand votes it is spaghetti head’s deserved victory in a poll I remember was the easiest to vote in for years given the varying qualities of the stories. Despite some peoples’ griping over the dating, `Mawdryn` struck me as the season’s only classic, a rich mixture of nostalgia and ideas. “Brigadier was superb” is the write up it gets in a tiny summary of some views below. In second place was `Enlightenment` whose visual extravagance masked a rather slow story but the surprise for me was seeing `Snakedance` coming fifth beaten by both `The Kings Demons` and- gasp- `Arc of Infinity`. The latter which I have always seen as the real turkey romps in third though if you re-ran this poll today I bet it would trail last. You only have to see it a second time to remember just how bad the Ergon is and how little sense the story makes. All of which means `Terminus` is bottom proving that disrobing companions and a giant cuddly bear are not certain to win people’s hearts! 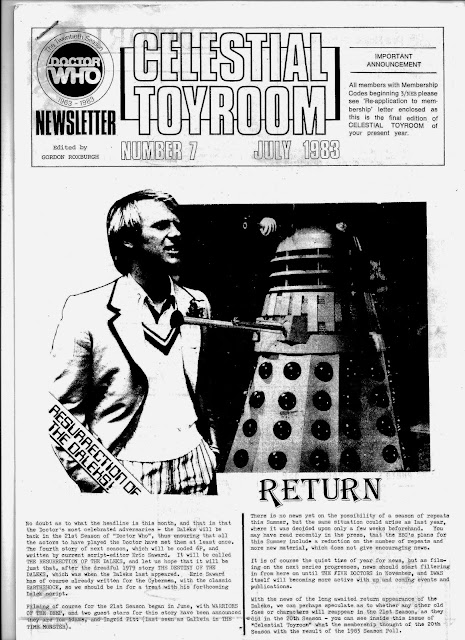 Amongst the fanzines advertised this issue is `Cerebratron Mentor`, which everyone used to either spell or say incorrectly but which was one of my favourites of the period. Other zines here include `Tardis Data Bank` `The Animus` (second “amazing” issue apparently), `Console` issue 7 (“for a good read”) and `Shada` issue 15. Like `Oracle,` `Shada` seems to have started copying the renowned `Frontier Worlds` style of advertising with an enigmatic comment and no info. Here we see a Yeti and the strapline “He’ll be reading it- will you?” Even the official reference department’s got in on the act with an ad that simply says “Something SPECIAL is coming from the Reference Department.” Yikes the Cardiff local group have produced a zine all about Sutkeh the Destroyer including a detailed analysis. I wonder if it mentioned anything about his chair? Oh and remember that quiz Superwho2 from last issue? Well in his column David Saunders says the feedback is that people found it “fairly tough”. 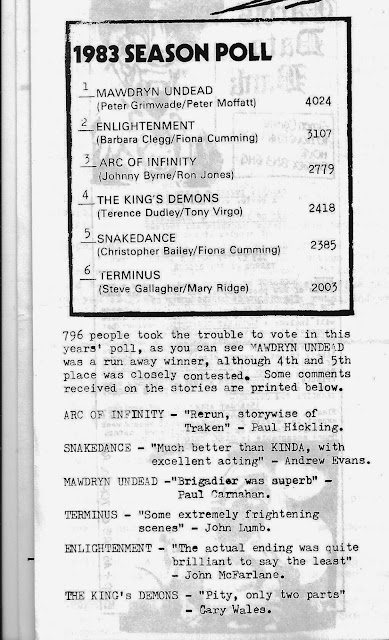 Gordon’s way with underwhelming headlines endures with the August issue that heralds `Departure and Arrival` but it’s the arrival he’s interested in. Mark Strickson is leaving it seems and replacing him- and also the soon to depart Janet Fielding- will be Nicola Bryant. Has a companion ever been introduced by way of their vital statistics before? Well Nicola is here along with the `fact` that she has a natural American accent. I don’t recall that much fuss over the fact that she was the first American character to become a companion, well nothing like the fuss over those vital statistics anyway! Other news of the 21st season this month is the return of Dennis Lill to the show, this time in `The Awakening` a story in which Polly James of Liver Birds fame will also guest star. Peter Gilmore, tv;s James Onedin will feature in the third story `Frontios`. We are not given the vital statistics of any other actor btw. Elsewhere there’s talk of a radio adaptation of `Genesis of the Daleks` directed by Andrew Sewell.

CT is now feeling a little fuller than earlier in the year with snippets of news dotted about such as the fact that if you show your DWAS membership card at the Blackpool exhibition you can get in at children’s prices, covers of forthcoming Target books (`Mawdryn Undead` this issue) and news of the next DWM’s contents.
There’s also the results of two more season polls. They’ve been carrying these out for each pre-DWAS season and here we find that `The Celestial Toymaker` tops the season 3 poll with `The Dalek Masterplan` in second place and `The War Machines` third. Of course a majority of members were probably too young to recall these stories. The top three score over 100 points each with a gap of just 3 points between first and second. Trailing at the foot of the poll is `The Gunfighters` which anyone whose seen it will testify is hard work indeed.
Over in season 4 we have a comprehensive victory for `Evil of the Daleks`, 82 points ahead of second placed `Tenth Planet` which narrowly beats `The Moonbase`. `The Smugglers` gets just one point but I suspect that is because only one person voting actually remembered it. The issue concludes with the still going strong Swap Shop, a feature of CT from the start. Here we find someone who has several Target paperbacks, Typhoo cards and a Dinky toy Tardis wants “any Doctor Who photos”. He promises that in exchange for these you get “everything and more”. John Fitton has one in there though has nothing to give but wants “anything old and unusual”.Don't ask for much these people do they? 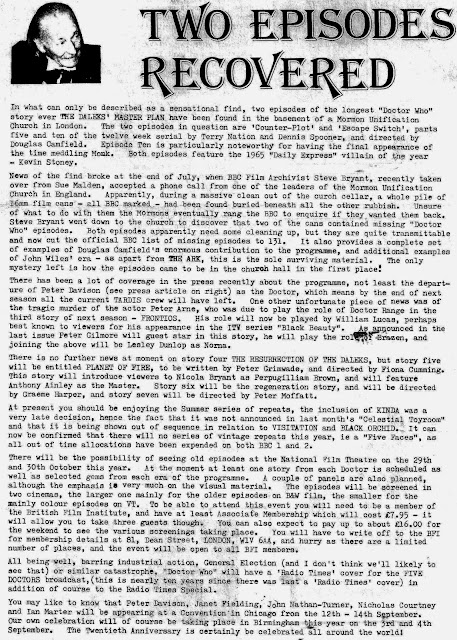 September brings news of a “sensational find” with the discovery of two episodes of `The Daleks Masterplan` namely `Counter Plot` and `Escape Switch`. The story tells us that they were found during a clear out of the cellar of the Mormon Unification Church. They’ll need a bit of cleaning up first though before we can see them. Again suggesting a Letraset shortage (or allergy!) Gordon has no more headlines instead grouping various stories in one big wodge of text something you’d never find us doing here. Thus the departure of Peter Davison is mentioned almost in passing. There’s also reference to the sudden death of the actor Peter Arne who had been due to appear in `Frontios`. His role is now to be played by William Lucas. Other news includes showings of some episodes at the National Film Theatre in October with at least one story from each Doctor planned.

Inside for the first and only time the DWAS accounts are published, one of those uncannily precise accounting tables in which 1982’s income and expenditure match to the absolute penny in a manner that just sounds impossible. To add to 1983’s finances you can purchase Society T shirts for £3.50. Presumably these did not have pictures of the exec on them! Another rarity is the appearance of a Writer’s Pool column this issue. This department dated back years but would only break surface to announce a new issue of the fiction zine `Cosmic Masque` and indeed it is issue 7 that is being promoted here. There is also a competition to write a short story, the catch being you need to buy said issue 7 to get the entry form. Well Ian McLachlan is Scottish!

More anniversary poll results take us to Season 5 where `The Web of Fear` is the unsurprising victor over `Tomb of the Cybermen`, these two some distance ahead of the pack. `The Ice Warriors `takes third place while last position is occupied by `Enemy of the World`. I suspect if you ran this poll again now, the latter would move up the table quite a bit.  Season 6’s results hold few surprises either with `The Invasion` a comfortable winner , `The War Games` coming second and `The Seeds of Death` third. Bringing up the rear is `The Space Pirates`.
There’s a rich selection of fanzines on offer this month with `Dynotrope` issue 4 having a Barbara Clegg interview, the latest `Skaro` splashing out on a colour cover and accounts of the Longleat event while `Shada`s issue 16 ad just showing a picture of a Sontaran and the strap line “Track one down”. Now that’s the sign of a very successful publication.
Posted by John Connors at 14:52