In the environment of contemporary television, telling a new Doctor Who story begins long before broadcast. This is especially true of event episodes such as World Enough and Time. The involvement of the ‘Mondasian Cybermen’ was announced on 8 March 2017, over three months before transmission. John Simm’s return as the Master was confirmed on 6 April. By the end of May, Doctor Who Magazine had made it known that Missy would be apparently working with the Doctor and that the episode would be set on a spaceship trying to reverse out of a black hole. The suspicion that the return of the Tenth Planet design of Cyberman (albeit streamlined for ease of wear and viewing) would allow for the development of Steven Moffat’s interest in the body horror aspect of the Cybermen, first seen as long ago as The Pandorica Opens, was confirmed by sight of the ‘topknots’ on location in Cardiff in March. The publicity images for the episode suggested the Doctor was appalled at the Cyberman for a very specific reason. Enough pieces of the jigsaw had been released through legitimate means to suggest the broad shape of the story, but not the detail. For those of us exposed to the media and fandom chatter that surrounds a Doctor Who season, World Enough and Time was a source of apprehension because we were being prepared for a series of betrayals and violations which would unfold before us on screen and which threatened not only lasting damage to our shared imagined world, but the questioning of our own humanity. 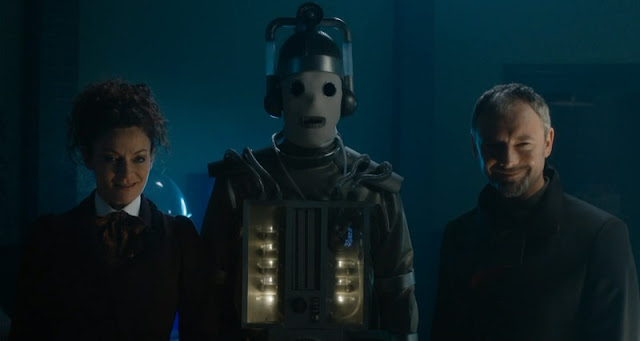 The emergence of the Cybermen was managed in a satisfactorily disturbing way. The audience was primed by Jorj the janitor to expect ‘things’ from the lifts, but what emerged was disturbing in its humanity rather than its lack thereof – badly injured people whose reconstructive surgery had been interrupted and who had been sent out into the world regardless. A viewer could infer from what they saw of Bill’s experience of the hospital that there were wards full of such people, being warehoused for a future when the operations could be completed satisfactorily. The society on floor 1056 has a leadership which can’t afford not to start the process of Cyber-conversion, but can’t bear to explain its implications to the population. This is of course common ground with Marc Platt’s audio story Spare Parts, but the Cyberman origin story here takes place in a setting previous Doctor Who lore hadn’t allowed for, a stricken colony ship. Its telling is focused on two witnesses from outside with a limited view of the society in which they find themselves (though more apparent than real in Razor’s case) rather than on the interactions of TARDIS travellers with representatives of different occupations and social classes. The ‘topknots’ chill because every aspect of their existence is forced upon them. When not performing errands they are complaining of their suffering with limited vocabulary and without the use of a human larynx, sitting inertly, or eerily acting in unison like Moffat’s gas mask people of twelve years ago. At the point where the proto-Cybermen have simultaneously noticed that Bill is moving towards the full-length windows and freedom, we know about the use of painkillers but not about the ‘neural net’, mentioned only by the Doctor towards the close of the episode. Turning up the volume knob on the painkiller cylinders is turning down individuality and the right to die. One of the first topknots Bill encounters issues a hideous gurgle which amounts to a death-rattle, but it continues to live. As the episode moves on and the Cybermen evolve, they are allowed more sensory input and expression, with eyes and mouths, as if they can now be trusted not to act independently but only as nodes of their society’s common purpose.


The appearance of the Master as Razor was trailed by a guarded previewer (Paul Jones of radiotimes.com) as ‘a character who manages to impart warmth and plenty of black humour and who you feel may become more significant as the story proceeds’. The Razor persona was certainly designed as someone in whom Bill would find a natural ally in a carefully managed alien society. Without dismissing the influence of other polluted dystopias in film and television (Blade Runner without the advertising and the theatricality, perhaps) costume and set design suggested Second World War Britain as a principal point of comparison for the Mondasian colony on floor 1056, one uncomfortable for someone with Bill’s spontaneity. Although commentators have seen Razor as drawing upon the problematic ethnic stereotyping behind Oliver Twist’s Fagin and Babylon 5’s Zathras, my first reaction was to see an imprecise sympathetic foreignness which reflected both Bill’s outsider status in this society and perhaps enabled her to come to terms with her alienation from herself given that she has been ‘repaired’ with a Cyberman chest unit. This persona helps the Master manage Bill. Perhaps the ‘burgling mask’ which Razor wears when supposedly on his way to the lifts is just one of many clownish entertainments which the Master has put on for Bill, as well as for himself. The Master explicitly tells Missy that he developed the Razor identity so Bill didn’t recognize him as the former prime minister (explaining the reference to Harold Saxon in Knock Knock); this indicates that he was already in a position to see images from the bridge when the TARDIS arrived, but was he already expecting the Doctor? Questions for another episode, perhaps. His enjoyment of Bill’s company and acting the part of Razor is the pleasure of the torturer – his reward is to betray Bill on the eve of the Doctor’s arrival at floor 1056 and then gloat when the Doctor is confronted by the reality of her conversion. It’s a slow build to this moment, but an effective one, delivered by Steven Moffat’s attention to the relationship Bill has with Razor, and the performances of Simm and Pearl Mackie.


Despite my enjoyment of Pearl Mackie’s performance and indeed the way the Razor and Bill scenes were written (and not only because of their fan-pleasing conceit of having Bill watch what might as well have been a telesnap reconstruction but without the benefit of an audio track beyond the viewing audience’s commentary on familiar tropes), it’s difficult to disagree with those critics who thought Bill was badly served here. Her lack of sustained curiosity about her situation and years of inaction amidst suffering patients isn’t the person established in earlier episodes. It’s difficult to imagine Bill allowing herself to go for years without wondering what is under the ‘bags’ which cover the heads of the ‘special patients’, or having more communication with people coming into the hospital as well as those who are already there. As Andrew Ellard has written, Bill becomes complicit in the conversion process rather than fighting against it. One might argue that this is realistic, but we need Doctor Who to be heroic drama, and Bill is already established as a heroic character, who wants to help people and improve situations. Here, she assimilates remarkably well.


One consequence of the time dilation – as has been widely noted – is that Missy is sidelined after her acerbic comments have dominated the early minutes. There is little to bridge her early scenes of baiting the Doctor, his companions and indeed fandom with her insistence that the Doctor is ‘Doctor Who’ – building up to the Doctor introducing himself by that very name, vindicating World Distributors, WOTAN and nearly two decades of credits – and her meeting with her earlier self at the computer terminal on floor 1056. This renders the episode more fragmented than it need be; and if there had to be delay built in to the Doctor’s strand of the episode, to stop him following Bill in the lifts immediately, perhaps Missy could have provided some distraction or indeed exposition rather than have the Doctor seemingly waste time giving a lecture before entering the lift.


A further area which invited development is the conflict between the different duties the Doctor owes his friends. As is told in flashback, the need to rehabilitate Missy had overtaken everything else, and Bill and (especially) Nardole (sadly again underused) were swept along with it. The Doctor’s nonchalance about his own authority is found wanting throughout the episode, but the relationship of his failure to convince Jorj not to kill Bill – by repeating lines from Oxygen that aren’t especially relevant to this situation – to his failure to consider his newer friends’ feelings over their projected involvement in the reform of his oldest friend could perhaps have been developed more. As it stands, and without having seen how the story proceeds in The Doctor Falls, the Doctor’s horror at Bill’s conversion is somewhat disconnected from his earlier insouciance.


As often, there’s a lot to infer in this episode. If the society on floor 1056 never heard back from the expedition to floor 507, it’s reasonable to assume that they made expeditions to intermediate floors, and Jorj’s schematic suggests that the lower levels are teeming with life above floor 1056. Presumably this accounts for Razor’s fried breakfast – there must be farms supplying floor 1056 which are closer to it than floor 507. Similarly, development of the Cybermen must have begun early, for the ‘things’ to arrive in the lift as quickly as Jorj suggests. The lower decks of the ship must have been well supplied with adaptable technology as well as the means to grow food. Perhaps the Master was already lurking there, to shape the situation for his amusement.


The Doctor Falls might be the title of the final episode yet to come, but the Doctor has already fallen a long way. He scolds Missy for enjoying performing too much and not focusing on the problem set, but he has ignored his own recklessness in placing her in charge of a situation he can’t control and precipitates Bill’s incorporation into one of the greatest evils he has ever encountered. Can the Cybermen be fought over and within Bill’s undead body as well as through the ship? As Andrew Marvell wrote in To His Coy Mistress, we don’t have world enough and time to do anything else but tear through the iron gates of life. If Bill can be released from her iron gates (and plastic and much else) she might devour time again rather than languish in its slow-chapped power, and the Doctor be reminded of the gap between the perspective he shares with Missy and the mortality of human beings about which he has been too carelessly glib. 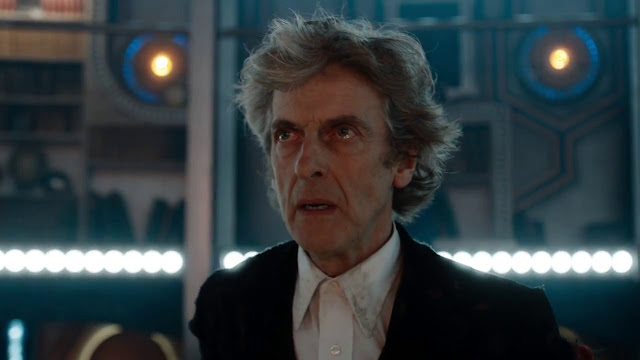