It Takes You Away reviewed by Sean Alexander
I’ll be totally honest here - this series of Doctor Who hasn’t done too much for me.  Generic villains, an almost pathological decision to keep fifty-five years of continuity out of the mix (almost as though showrunner Chris Chibnall took one look at last Christmas’ Doctor-mash ‘Twice Upon a Time’ and had the same misgivings about the direction of things as he did in 1986), a severe lack of consequence in these hermetic ‘bubble’ episodes, and a Doctor who was both generically written and, in Jodie Whittaker’s hands, seems to lack the kind of star power to not only carry a show but extinguish any lingering accusations of the show ‘going female’ for political rather than dramatic affect.  Bradley Walsh remains for me the only great triumph: humble, blokey and capable of saying far more with an anguished frown than some of his costars manage with reams of exposition or passionate grandstanding eulogies.  Oh, and on the subject of dialogue, possibly my greatest bugbear: telling rather than showing.  Week after week the expositional level of each script has been at the cost of actually engaging this member of the audience, almost as though the lengthened timeslot has demanded more jaw-jaw over war-war.  Perhaps it’s the presence of prose writers amongst the all-new writing team, I dunno.  But where I once hankered for the 80s incidental music to tone things down so I didn’t miss the dialogue, now the dialogue intrudes on Segun Akinola’s score.  And that can’t be good, can it? 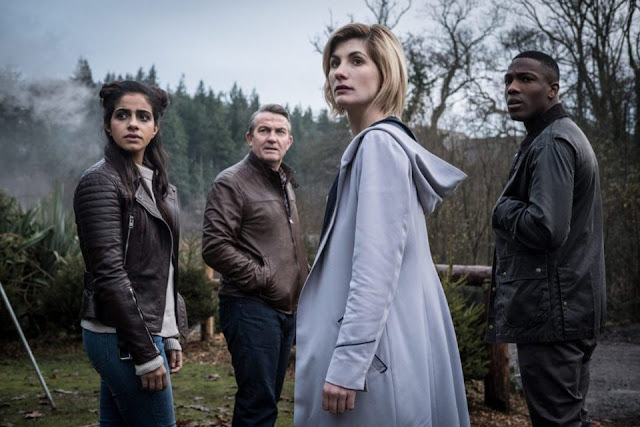 Kerblam reviewed by John Connors
If you’re a frequent user of online retailers and have wondered what goes on behind the scenes, the packing process is probably not  a million miles from what is depicted in this lively episode, the most traditional this year so far.  Materialising delivery robots are not yet but there is already talk of using drones. It is this familiarity of concept- which shored up many a Russell T Davies period story – that means the viewer can more easily connect with what’s going on.  I do know people though who think it’s the worst one of this series; it looks like it might be one of those polarising stories. For me` Kerblam!`ups the ante over the recent run of episodes which were good but felt small scale. For a change thousands of people are at risk from the antagonist’s plan which itself stems from a deliberate though properly explained reason. After a run of either monsters by accident or rather lacklustre villains it is pleasing to have an episode with more than mild peril.


From the corporate front to the enormous warehouses and famed Kerblam man the story initially appears to be a direct satire of Amazon and by extension online shopping. Keblam’s headquarters itself has the same sort of design and service model as our favourite online retailer though one suspects a rather more generous 10% human workforce. Yet as the episode unfurls what Peter McTighe’s tale is really interested in is the way employees are treated and the remoteness of decision makers from the people whose decisions they affect. 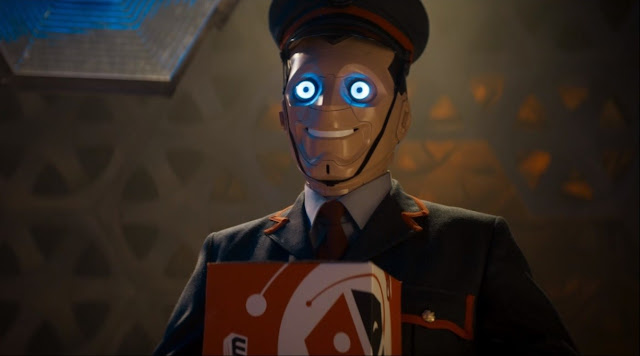 Series 11 - The Tsuranga Conundrum & Demons of the Punjab


Chris Chibnall’s most dynamic Doctor Who script prior to becoming showrunner was `42` which had a superb sense of urgency that is shared by `The Tsuranga Conundrum` to equally strong effect. While there are no real innovations in terms of the scenario, and almost every element can be traced back either to earlier Doctor Who or one or other Star Trek series it is played out with an involving sense of character. It is so well packaged, directed with such flair and performed with such gusto that the viewer is swept along. A visually impressive opening scene on a celestial junkyard leads to a peril strewn adventure in one of the series’ most generously spaced ships which has an air of Star Trek- Next Generation about it. If the cause of much of this danger is a comedic looking albeit dangerous alien kudos to the production team for going with something different. Well something that resembled the Crazy Frog!


That fantastic opening vista pure takes your breath away and it’s not even going to be the setting for the episode! A junk strewn world viewed from above it is one of those moments where you can say- “only in Doctor Who” and I was so taken with it that it the jolt from there to the main location was almost as jarring for me as it is for Team Tardis. Are we calling them that? Yeah, go on then. 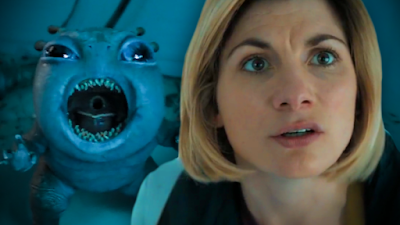 What the episode successfully achieves more than anything is making the Universe seem very big and sometimes odd. We meet a whole culture and two races we’ve never heard of before and there are no back references which makes the whole thing seem fresh. It’s true that you can sometimes see the parts that make up the sum- the Trek inspired ship and android, the retro sci- fi alien, the influence of `42` and indeed `The Invisible Enemy- yet it coalesces into a packed, breathless 50 minutes. Yes it is convenient that such a legendary pilot just happens to be on board but sometimes we are too super critical of writers. There are just enough different characters and subplots each of which get time to shine yet feed into the overall story.

Series 11 -Rosa & Arachnids In The UK


Television on a Sunday. Never the most exciting or essential time of the week. The place where they put everything that they had to show, but nobody would have tolerated them doing so on a day when they might actually have been watching.


If you got up early enough, there was a bible lesson from The Sunday Gang, with Teena asking why no-one ‘elped that poor geezer before that Samaritan come along while Mackintosh Mouse screeched about sassenachs in the corner. Morning Worship and Songs Of Praise, to remind you that actually literally physically going to church wasn’t quite enough for Jesus. Weekend World, The Money Programme and Credo and their frustrating combination of exciting theme music and tedious topical content. Out Of Town, which didn’t even bother with exciting theme music. Whatever in the name of sanity Cabbages And Kings actually was. That’s Life, which you watched because it was the closest thing to actual entertainment on offer (although I am not prepared to make a legally binding claim that it actually was entertainment). And hidden away right at the end of the night, ITV’s almost-too-hot-for-broadcast stick-them-there-and-hopefully-Mary-Whitehouse-will-have-gone-to-bed comedy shows like Spitting Image, The New Statesman and Clive James On Television. Which were actually good, of course, but due to a combination of parental nervousness and the inevitable clash with something on the ‘other side’, you rarely actually got to see them and had to pretend in school the next day that you had. A pretence that could generally be convincingly maintained for upwards of two and a half minutes. 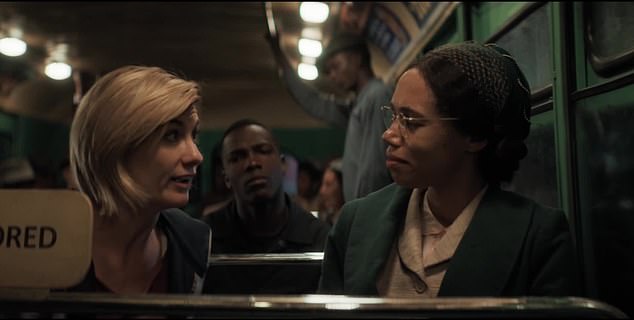 Series 11 - The Woman Who Fell to Earth & The Ghost Monument

The Woman Who Fell to Earth reviewed by Matthew Kilburn


When I was growing up, turning on the television at 6.45pm would find BBC1 in the middle of Songs of Praise, or ITV about to embark on its own half hour of Christian devotion. With Songs of Praise now adrift somewhere in the middle of the afternoon, and ITV long having shed its Sunday evening ‘God slot’, it’s tempting to regard Doctor Who’s translation to Sunday nights as a recognition that it, now, is the new established faith of the United Kingdom. The excited reporting of social media’s overwhelmingly favourable reaction to The Woman Who Fell to Earth on the 10pm news on BBC Radio 4, complete with approving quotations from an interview with Jenny Colgan, suggested that the projection of public celebration of the new version of Doctor Who is exceptionally important to the BBC, almost existentially so. 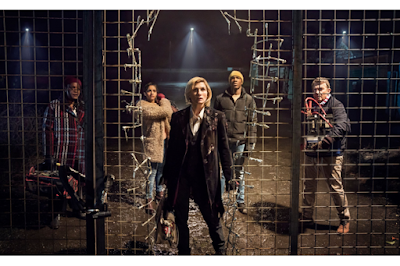 There were moments when Chris Chibnall’s first script as showrunner seemed concentrated on plugging in to strands of British identity which have been repressed in recent decades. The Doctor makes her new sonic screwdriver of Sheffield steel, which becomes the wonderworking of a forgemaster technogoddess rather than the product of a clapped-out industry as in perhaps the last worldwide entertainment hit to mythologise Sheffield, The Full Monty. The real economy is in the workshops of the land, rather than in the glass towers of London. The aliens attack sturdy old InterCity rolling stock rather than the cut-price Pacers with which most of northern England was fobbed off and which still endure on the privatized railway. The crane driven by Karl is building something rather than demolishing, despite the broken handrail which almost sends Tzim-Sha – cannily credited as ‘Tim Shaw’ – to his death. Yet this isn’t Brexiteer-inspired isolationism, because old-fashioned British craft is at its most marvellous in alien hands. The Doctor blends it with the technology of less pleasant offworlders than herself to pursue her quest for the TARDIS. Her accidental teleporting of Graham, Ryan and Yaz from the workshop surely presages celebrations of open-mindedness and exploration.