It is fifty years since Jon Pertwee became the Doctor and 100 years since his birth. He is the first Doctor I remember and even though I became a big Tom Baker fan I still hold his predecessor in high regard. I took much too from the stories of his era, a linear method that may seem strange in today’s climate but which I still like. The abiding memory that I have of Jon Pertwee is that of a mega star. His appearance was once the climax of many an event and always announced with the appropriate fanfare. Then Pertwee himself, sporting some variation of the third Doctor costume, would stride up the central aisle occasionally pausing to acknowledge the tumultuous applause. He’d arrive on stage, turn to the crowd, his cloak outstretched to grandly announce; “I am the Doctor” to even more cheers and camera flashes. Then with a swish of that cloak he would sit down to survey his followers. Many politicians would do anything for such an appreciative response. It’s unclear who was the more thrilled by this entrance – the actor or the audience. 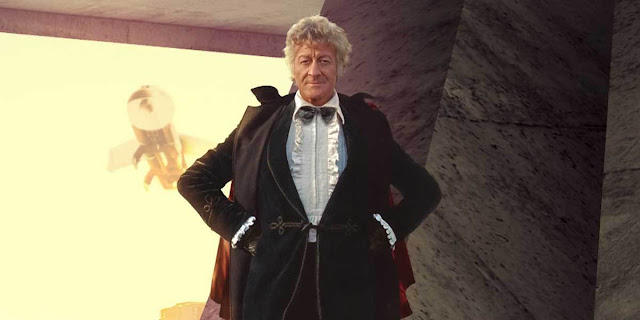 Can you imagine the characters from the Third Doctor’s era taking to the football pitch? The Doctor sporting velvet shorts and a cape, Jo Grant stopping to pick daisies, the Autons walking rather than running, the Sea Devils preferring the dressing room bath to the outdoors. Alpha Centauri in goal of course. This is actually not what DWM’s Third Doctor World Cup is about at all. To celebrate fifty years since the Big P became the third Doctor, their Twitter page has been running what must be one of the most fun Doctor Who related ideas in a long time. Based on the format of soccer’s biggest competition the process divided Jon Pertwee’s stories into random groups and then asked people to vote for their favourite in each group. The story with the fewest votes was knocked out. As we’re used to polls in which you award a mark for each story or episode, this process brings with it all the fascination and frustration any football fan will recognise with mismatched draws, very closely fought contests, shock eliminations and unexpected results. It also shows from the first round how consistent a period in the show’s history this was with some excellent stories exiting right away. Goodness knows how hard it would be to vote like this in a Fourth Doctor poll.