The idea of animating a whole, unavailable old Doctor Who story is a step forward from filling in missing episodes and judging from what’s been done here, a fascinating opportunity. Originally shown in 1966 and long since wiped, this 52 year old tale has always been one of the less regarded of the canon. Those who did see it at the time don’t rate it highly, those who have seen telesnap reconstructions or heard audios don’t seem much more enthusiastic either. This release lifts `The Macra Terror` from its foggy origins and gives it a chance to succeed. It can’t be some huge re-make nor can it alter the overall plot but it does take liberties with the original to service a better story and also to make the Macra more memorable for those who only know them from their surprise re-appearance in `Gridlock` and those couple of photos. Purists may carp – and a telesnap version is included for them – but this is as good as `The Macra Terror` can be- and it’s better than you think it will be. 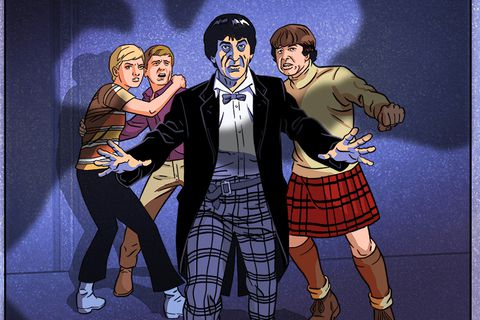