People were a bit surprised when they first saw Tom Baker as the Doctor. They had grown used to the velvet jacketed flamboyance of Jon Pertwee so this new fellow took a bit of getting used to as the Brigadier might put it. Unlike `Spearhead from Space` or `Castrovalva`, Tom’s debut is no real indication of what’s to come either. Caught in the crossover of production teams it seems a modest introduction to a new era. Yet it does –appropriately for the 2018 re-release as part of a blu ray boxset- contain a female antagonist. Plus if the Giant Robot that gave the Target novelisation its name is a bit of a disappointment the normal sized version is impressive enough.. Best of all over the course of four episodes Tom Baker eases gently up through the gears so that by the end he has become the Doctor. 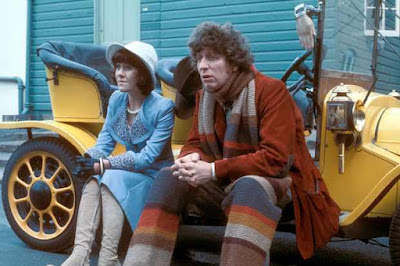 Issue 2 is fronted by artwork depicting a Voord and a triple chinned Doctor and suddenly I’m thinking- hang on a mo- it was published in late February 1977 with the now acclaimed 1976-77 season in full flow. And they chose to illustrate the official fanzine with something from an old story again for the second issue running? If anything shows the agenda of the people running the DWAS at that time it is this. Editor Gordon is asking members to vote in the season poll for stories they found enjoyable. I wonder if the editorial team would even be able to do that?  News-wise what’s happening in the world of Doctor Who right now is that the documentary producers have apparently found a lot of material related to the show some of which will be included. Transmission date is said to be April 1977. 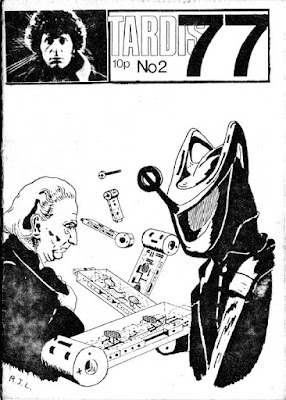