Note:`Tardis` started out as an independent Doctor Who fanzine but in 1976 was absorbed into the fledgling Doctor Who Appreciation Society (aka DWAS). This series of posts looks at the zine’s 1977 issues which went out under the appropriately correct title `Tardis ‘77`.
If you saw the posts last year about the first volume of Tardis you’ll recall the rather tatty covers but 1977 gets under way with a much improved front design featuring the second Doctor and a Kroton. The latter are one of those monsters which always look better as artwork than if you see the real thing. Its there to illustrate a series called The Doctor Who Compendium written by Richard Landen which summarises the Krotons, Gonds and HADS. It worth remembering that back in the day such information was not as widely known and there would be many readers who were too young to have seen the story. 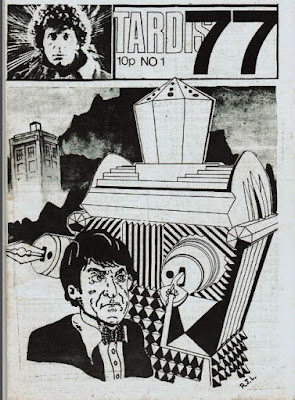 Gordon Blows was well known for expressing strong views and in his editorial he addresses `The Deadly Assassin` which was the most recent story broadcast while the issue was being prepared. Younger people may be aghast at what seems to be about a three month lag between the story going out and fan’s reactions being recorded as this issue is labelled Jan / Feb 1977 but the world was a different place pre-Internet.
Anyway Gordon’s had a while to simmer about the iconoclastic story. “I feel now this is a story the majority of us would wish to forget” he declares summarising responses to Robert Holmes’ re-imagining of the Time Lords. He also expresses a dislike of what he sees as the show “getting more and more concerned with itself instead of other lifeforms and adventures. Hardly an episode goes by without the Doctor confessing he is a Time Lord.”
DWAS President Jan Vincent –Rudzki continues the grouchy tone with a column talking about the show being stuck by “two terrible afflictions”. One he says is the use of superlatives for example someone described as “the most evil”.  Also he says its boring for the Doctor to save the Universe all the time instead of just, for example, a city or a person. The third affliction (yes he said two but he lists three!) is humans in every story. Surely he recalled `The Web Planet?!” What’s going on here- and will re-surface in his later review - is that most of the prominent people in the DWAS at this time were old enough to recall the Sixties stories and seemed to prefer them. 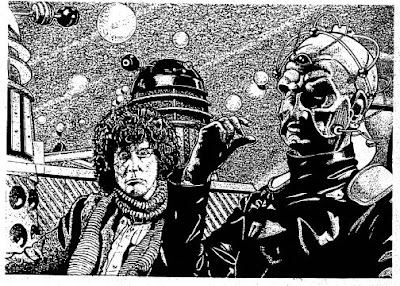 Newswise the big story is the upcoming departure of Philip Hinchcliffe, a new editor for the Society’s other publication Celestial Toyroom (Richard Leaver) and early news about the DWAS’ plans to hold a convention in August. The first DWAS Yearbook is on sale for the princely sum of 41p. Plus there’s information about a documentary to be produced about the programme.
An interview billed as being with Heather Hartnell actually consists of quotes from William Hartnell but is rather lovely anyway (see below). There is –warning- fiction this being before it was siphoned off into its own zine. Penned by Paul Mark Tams `The Genesis Requiem` concerns a powerful character called THE EVOLUTIONARY (yes in capitals!) and has the Doctor arriving at Stonehenge to receive a mission from the Time Lords. It looks vaguely promising but stops before its got going. Part 2 next issue.
The unintended centrepiece of this issue though is Jan Vincent- Rudzki’s review of `The Deadly Assassin` which has been oft quoted down the years.  This review started a tradition of the DWAS being an independent minded society rather than just an obedient fan club and because it was penned by the President seemed to suggest the entire DWAS was behind his views. He really doesn’t like the story (see full review below). OMG he hates it. All these years later you can feel his blood boiling – in fact he’s so angry he doesn’t even bother to type out Time Lords; just calling them TL for most of it. He rails about the number of floors in the citadel, the fact that the Time Lords have guards and bad hips, about Runcible and so on. Special disdain is reserved for episode 3 which he describes as “the biggest waste of time ever in Doctor Who”. His conclusion- “what has happened to the magic of Doctor Who?”
With an odd sense of pacing editor Gordon slots a comic strip and Martin Wiggins’ latest instalment of the History of the Time Lords in between the rant. It’s about their hips. Ha! Just kidding, it’s about time travel. There’s also an Ian Marter interview recorded when he was in a play called Baggage and his film screenplay co-written with Tom Baker gets a mention.
Amusingly the first sentence on the first letter of the Trans Dimensional Mailbag says “The Deadly Assassin” was brilliant” and indeed of the four people who talk about it, only one really disliked it. So perhaps JVR didn’t represent as many members of the Society as he thought?
William Hartnell quotes - 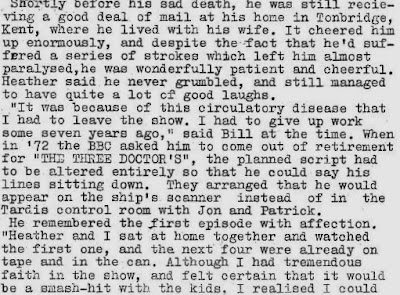 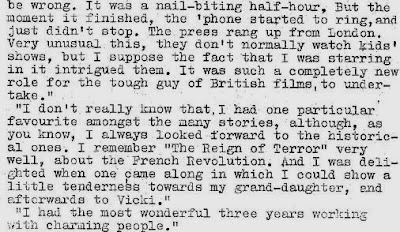 That Deadly Assassin review in full! 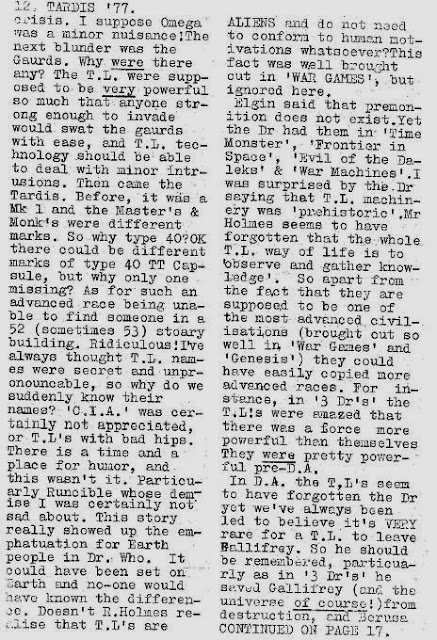 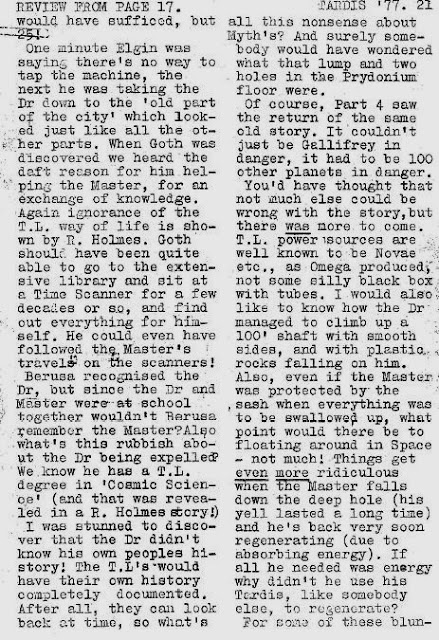 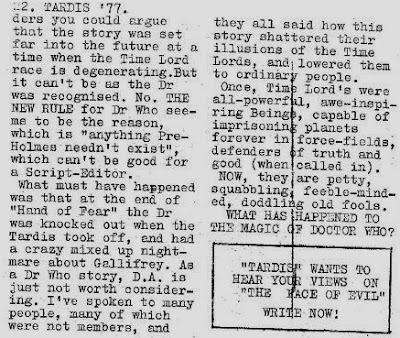