Time and the Rani Episode 4


Season 24@30. After all the meandering of the past two weeks this final episode gets the story into gear with surprisingly effective results. You do wonder about the Tetraps though. This week they come out of their den to have a walk to the Centre of Leisure and there’s about 15 of them we see leaving the Rani’s HQ. Yet only three enter the Centre. Have the others gone shopping? I love the way too they refer to themselves with the forename `Tetrap`. “Tetrap Steve, Tetrap Joyce we’re going to the Centre of Leisure”. The other thing about them is that despite having eyes all around their heads they still turn round to look at things! Tetraps- crazy name, crazy guys!


The second of the mid Seventies Doctor Who poster magazines is superior in content terms and is produced by a different team (Harpdown Publishing in Barking) and declares itself to be “a special monster packed issue”. Those two giant posters are of the Doctor from `Brain of Morbius` and Lynx from `The Time Warrior` It does mention inside that it includes “a giant poster worthy of the biggest star of Saturday viewing” by which I assume they mean the Doctor and not Lynx! Unlike its predecessor all of the photos in this issue are in colour and it is as `monster packed` as promised. 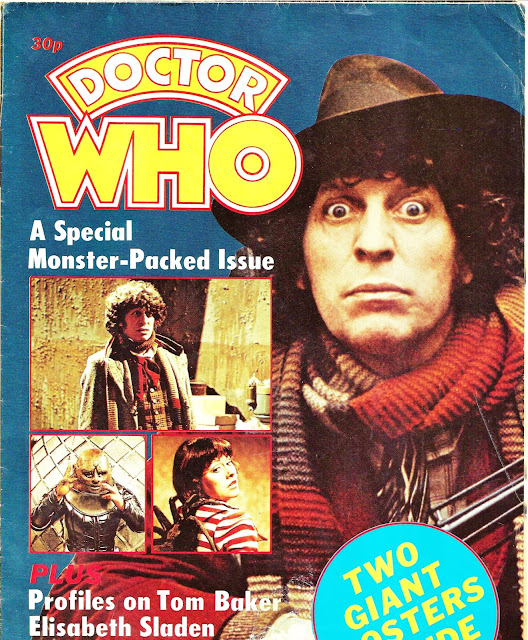 Time and the Rani Episode 3


Season 24@30. Ah, part 3. Most Doctor Who stories of old had a part 3 in which as little as possible happened but they had to do something to fill in the time. Nowadays you don’t get Part 3isms because there isn’t time but this is a` perfect` example of the artform. Plus I've been thinking that if you’re a Time Lord then you might already know more about time than a load of geniuses from Earth’s history or maybe if you didn’t you’d perhaps consider capturing geniuses who would actually know about time other than the Doctor. The Rani’s plan is just a bit difficult to grasp.

Time and the Rani Episode 2


Season 24@30. If you’re a fugitive on a planet covered in rocks it might just be an idea not to sport your normal bright orange and yellow number but perhaps acquire a dark cloak of some sort. Welcome to part 2 in which last week’s cliffhanger is rather adeptly untangled by having the bubble trap land on water. You see sometimes the much maligned Pip and Jane are somewhat better than we remember. Like the scene when the new Doctor and the real Mel finally meet. This perfectly played sequence starts with a little physical comedy, then a series of accusations and counter accusations and then when each realises the other’s identity an affectionate reunion. Well played in every sense. 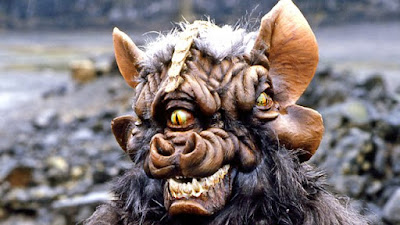 Season 15 @40. Terrance Dicks understands how Doctor Who works better than most writers and if his material sometimes plays to the wider audience rather than the dedicated fan the story is usually all the better for it. His `Horror of Fang Rock` is one of the show’s definitive community under siege stories never straying from its remote sea lapped lighthouse from start to finish. Production wise it is a triumph evoking sea fog and cold waves with little more than lighting, a realistic looking set and sound effects that mean the tides are constantly ebbing in the background. Lighting was one of the aspects that the programme nearly always got right in the Seventies (and often got wrong in the Eighties) and this story is an excellent example of how to create the sort of mood you might expect from a superior stage production. 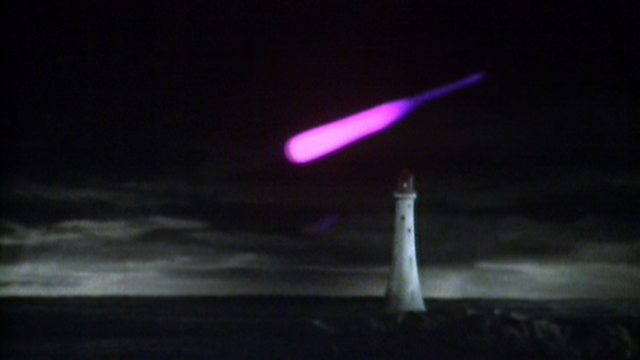 Time and the Rani Episode 1

Season 24@30. It’s thirty years since season 24 was first broadcast and across the next 14 weeks I’ll be looking at each episode of what was a transformational time when Doctor Who began to re-emerge as a creative force. Though the full extent of this artistic regeneration wasn’t seen till season 25, it is here that the seeds are sown. All four stories are sometimes a contradiction in styles- one minute there’ll be an intelligent or scary moment, the next something silly is happening. Yet it is surprisingly rewarding to re-watch as it was intended- an episode a week – to see just how Doctor Who started to get its mojo back! To start `Time and the Rani` is loud, hectic and peppered with orchestral stings, high camp performances and an unlikely plot. Still it is never boring and as it progresses on you can’t help being carried along by its sheer brio. 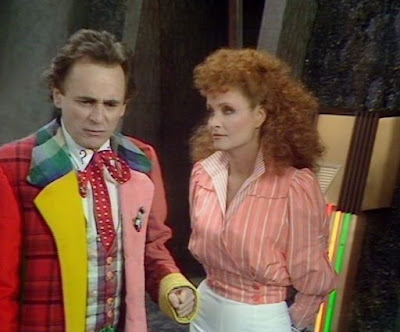 Compared to the previous season’s opening salvo of a great big spaceship twisting and turning we have a cheap video effects Tardis, a be wigged Sylvester McCoy and Kate O’Mara ordering her minion to “Leave the girl – it’s the man I want.” For a moment it looks like the series has got even worse! Writers Pip and Jane Baker are not short of ideas but their dialogue sounds exactly like it was written for an arcane stage play; nobody talks like a normal person. Back in the day I never got why the Rani spends half the story pretending to be Mel and yet suddenly now I see it and it still doesn’t make sense. If she’d bothered not to leave the girl, the Rani could have forced the Doctor to fix the machine and avoided having to cosplay at all. That being said, Kate O’Mara’s Mel is a rather cheeky interpretation.
Read more »
Posted by John Connors at 15:06 No comments:

Fold - Out Poster Inside!


In the Seventies some kids had posters of footballers or pop stars on their bedroom walls. Other kids though had a poster of a grumpy looking Vorus leader of the Guardians looking like he’d just had a particularly bad day. Or Field Major Styre looking rather pleased to be doused with flour! Fold out poster magazines were a big thing back in the day, the simple premise being that as well as features, the whole thing would contain a couple of A4 sized posters and would also fold out into one or even two massive posters. In the early days of Tom Baker, Doctor Who had two of these the first of which featured the fourth Doctor as its centrepiece and the aforementioned aliens as smaller A4 sized posters. 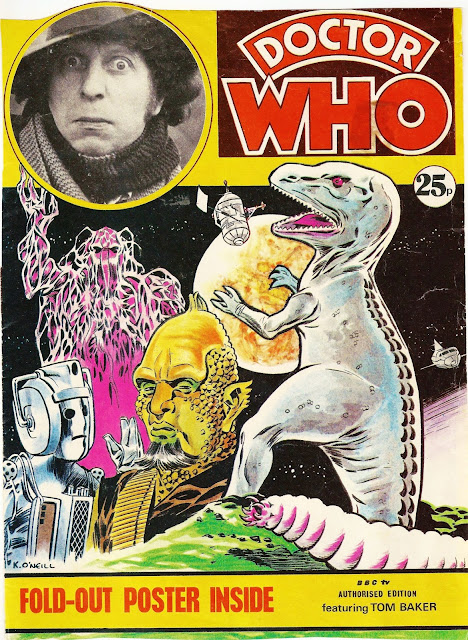