The Nineties saw a slew of fan produced Doctor Who spin offs of varying quality but none has the provenance of Downtime. It stars three iconic series regulars- Nicholas Courtney, Elisabeth Sladen and Debbie Watling - in their original roles and is written by Marc Platt who’s `Ghost Light` was part of the last regular season of the original series. Even more impressively it is directed by Christopher Barry who helmed such series classics as `Brain of Morbius` and `The Deamons` and it even features the Yeti, John Leeson as a DJ and Geoffrey Beevers! You can’t get much more Doctor Who than all that!  Shot during an unseasonably wintry late March in 1995 it is a good watch for fans of the series as well as a fitting tribute to the main stars none of whom sadly are still with us. 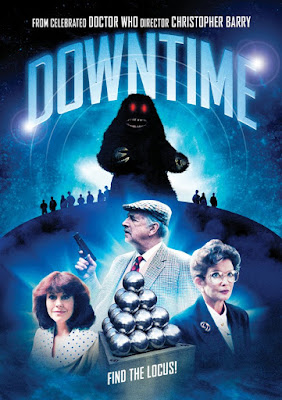 
Fifty years ago Debbie Watling joined Doctor Who as Victoria Waterfield and became one of the most recognisable companions and in some ways the archetypal one. Her screaming was so strong that it once defeated the monsters and for that reason she was considered to be a product of her time. It’s difficult to fully assess her character as most of her episodes were wiped though people who saw them say she was a vital addition and had great chemistry with co- stars Patrick Troughton and Frazer Hines. While her performance was of a somewhat demure Victorian girl out of time, in real life she was a lively addition to the cast and sometimes the victim of pranks at their behalf. 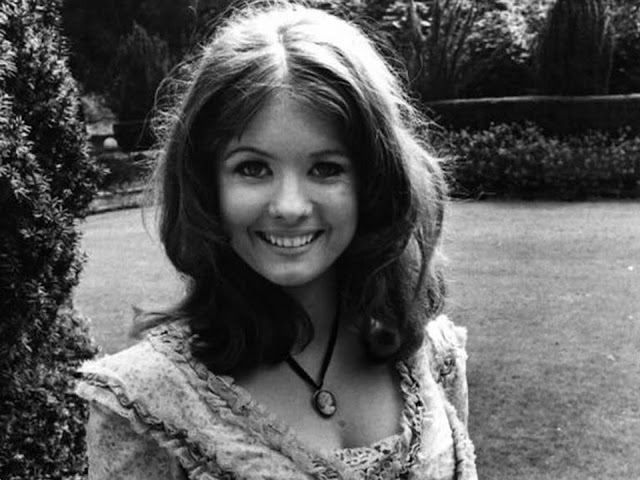 
Does Doctor Who frighten you? asks the strap line for issue 6’s cover. I don’t know about that but the drawings above the question certainly do frighten me! It’s April 1976 and the Doctor Who Appreciation Society is a heartbeat away from going national (check out last year’s posts about the Society’s early years). Before it does though there’s one more issue of `Tardis`. News items this issue include Tom Baker being mobbed in Southampton, the new season featuring “more space and historical flavoured adventures” and first news of a forthcoming record that would turn out to be `The Pescatons`. Somehow though there’s room for speculation about why there was no Tardis sound during one of the take offs in `Pyramids of Mars`. This question would definitely have been trending on Twitter if they’d had it then! 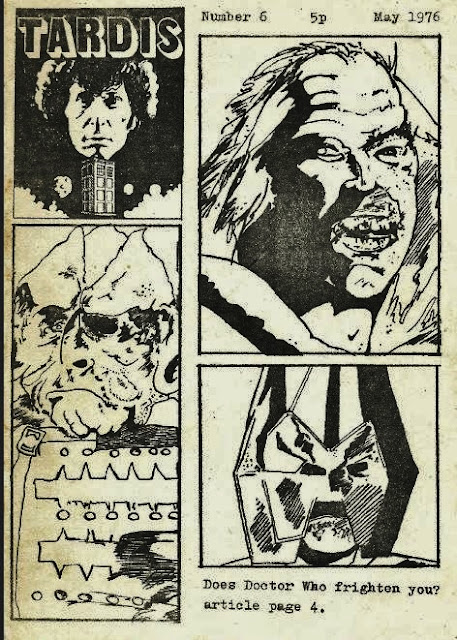 
Issue 5 is my favourite of these pre DWAS issues because it has an absolutely gigantic, step by step account of the Blackpool Doctor Who Exhibition. I know I’ve just run a series of posts about that but I wanted to save this one for here. Some people will find it dull to read, others of a certain vintage will find themselves re-living every sight and sound. There's even a clip from Tom Baker's column for the magazine Reveille in which he describes switching on the Blackpool Illuminations. This mega feature, reprinted at the end of this post, was treated like a separate wraparound booklet inside which the rest of the issue resided. It’s a cool fanzine idea that was surprisingly not done that often by any editors though few will have published such a lengthy article! Its penned by Stuart Glazebrook, better known back in the day for his artwork, but his account here certainly shows how he could perfectly capture an event with words too. 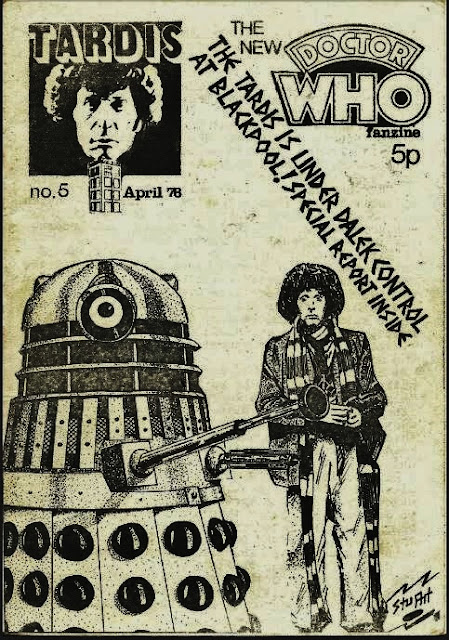