By 1976 the Blackpool Doctor Who Exhibition had established itself as one of the resort’s premier attractions and once again the contents had evolved. This year the displays began at the foot of the staircase over which a Pteradactyl from 'Invasion of the Dinosaurs' was suspended and then there was a  `Terror of the Zygons'  display featuring Broton and another Zygon with bits of their organic technology; all lit spookily behind glass casing to give an underwater effect.  On the wall beside this was some artwork depicting the first three Doctors transforming one to another. Next was a full size Krynoid with some of its tentacles thrashing madly; close up this really did seem impressive. 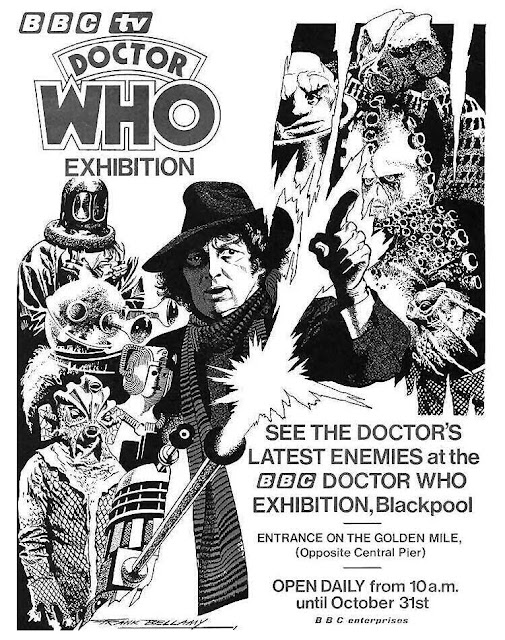 Further along the corridor was a gruesome collection from `Brain of Morbius` including the Morbius monster, the brain in a tank of bubbling yellow liquid and even a Mutt’s head in a vice twitching.  A soundtrack of excerpts from the story completed this real House of Horrors display.
In the next case was a series of models. There’s the alternative 1980 Earth from `Pyramids of Mars` which even has the TARDIS appearing and disappearing; all done with mirrors. There’s the oil rig from 'Zygons' falling over after being attacked and the Zygon spaceship in a deserted quarry. Finally in this section came Harrison Chase's mansion with the Krynoid on top. 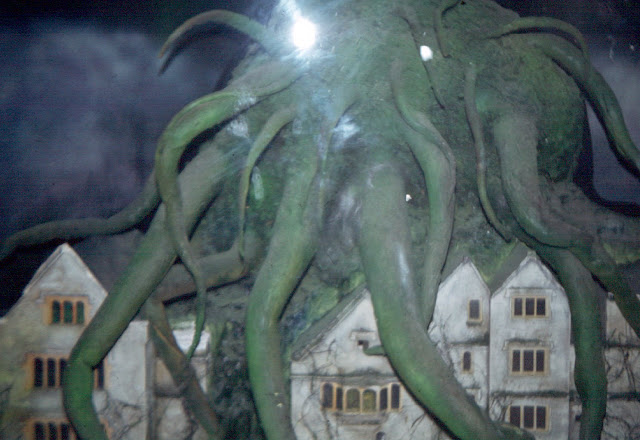 Davros himself was next lit by red and green lights, his claw hovering over his console. Meanwhile a Gold Dalek confronted the attendee telling them to “Halt! Identify- Identify. Obey the Daleks- Obey! Obey!” Rather than answering people stared for a while at this icon of the series realising that in some cases they were actually taller than them. Most things look bigger on TV and the Daleks are no exception but there is something about them that to this day inspires awe.


This was the last display before the console room.  Working from right to left around the circular displays matters commenced with two Cybermen  followed by the servant of Sutekh (he needs no other you know) who was wrongly labelled as Sutekh  plus a Mummy. Field Major Weam Styre to give him his full name was next along with his rather flimsy looking robot. Even on screen this did look like it was made of tin and in real life did not seem any firmer. Styggron came next accompanied by one of his androids. The largest display involved moving Daleks of various vintages moving about which even though you could see the rails remained impressive. Then it’s out to the shop and beyond. 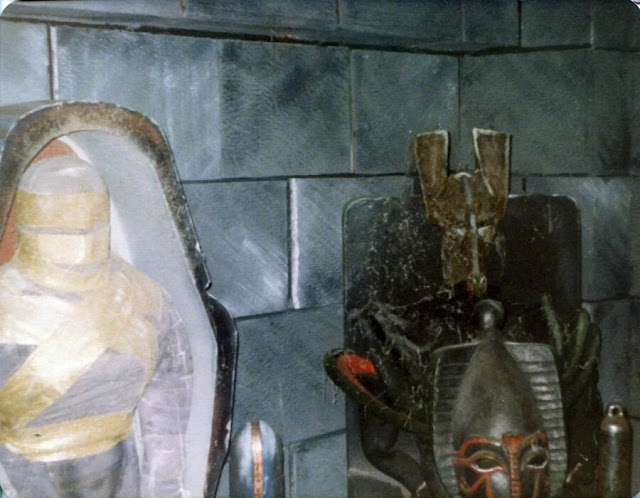 1977 saw a few changes with the matt black walls replaced by silver and black roundels. And there was a display at the top of the stairs too- a case containing the heads of a Mutt, Sea Devil and Exxillon. Once you reached the bottom you were confronted by two Voc robots, metal gloved hands outstretched probably not to welcome you! `The Robots of Death` was my favourite story of that season (just pipping `Talons`- well I was still a kid!) and to see the robots close up was quite a thrill. The ornate design that looked at once stylish yet deadly. Brilliant! Along the passage was the Kraal lab with grumpy faced Styggron and Chedaki looking even more grumpy faced without an actor inhabiting them and with what looked like illuminated ping pong balls for eyes! The display also include two white suited androids working on the Sarah Jane facsimile plus bits of equipment lying about. 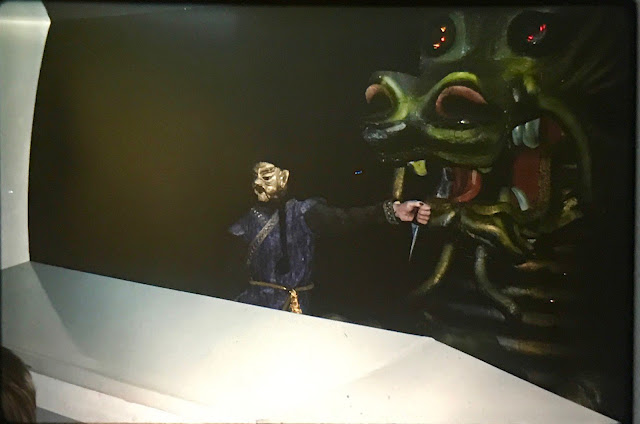 Next door an unmasked Sutekh sat amidst ultraviolet lighting, head wreathed in cobwebs adjacent to a Mummy case and the guardian of the Eye of Horus plus the Marconiscope. One of the most impressive displays ever to feature in the Exhibition was up next. Two Sea Devils standing in what appears to be an underwater tank. Only very close inspection revealed that they were in fact totally dry the undersea effects created entirely by lighting. Apparently this amazing effect was achieved by shining light through a water trough onto fine mesh. The trough was then constantly moved so as to give the impression of sunlight filtering through the water.


Clearly innovation was high on the agenda this year as the next display managed to give the initial impression you were about to encounter several Giant Robots. Mirror effects achieved this  adding to the already powerful appearance of the robot. There was then Sandminer model before one of the oldest exhibits that appeared- a Quark which looked in good condition considering it was getting on for a decade old by then. 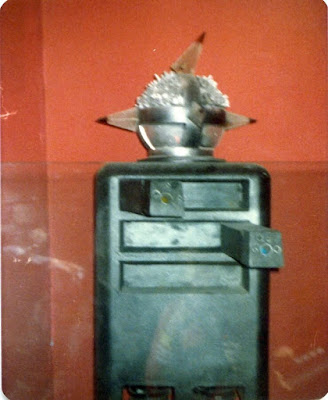 The Dalek was in its traditional location right before the console room which started with a `Talons of Weng Chiang` display that really lived up to the story’s atmosphere. The giant rat was there looking better than it did on tv drenched in blood red lighting. Mr Sin was standing nearby in front of Greel’s absorbtion chamber. `The Hand of Fear ` was next with both Eldrads standing in front of the reactor room set. A Zygon had also found its way here. Various aliens inhabited the next section including an Exxillon, Alpah Centauri (whose eye seemed to have been damaged), two Cybermen from different eras plus Styre’s machine.
`The Deadly Assassin` was the subject of the next section with two Time Lord costumes watching over the deformed Master who was well realised even without an actor to bring him to life. The familiar Daleks display came next followed by the lion’s head mask from `Masque of Mandragora`. This year there were even exhibits on the way out including some production drawings, a Drashig, an opened Krynoid pod, a Cybermat and some spaceships. Finally one thing people noticed is that, despite it being unprotected and sitting in a public street there was not one piece of graffiti or sign of vandalism on the TARDIS exterior entrance. Either this showed the respect the public had for the show- or perhaps it had its own HADS!
More photos in the Blackpool Doctor Who Exhibition Gallery- link above 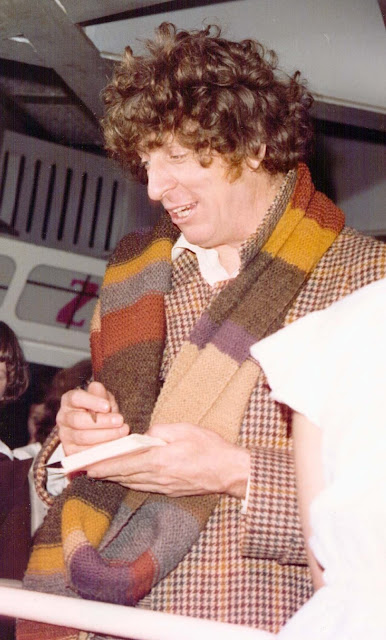