To begin at the end I'm being handed a slice of birthday cake topped with blue icing by none other than Mark Strickson. I've even got a bit of the '0' from the word 'WHO' so technically I am living, breathing and eating Doctor Who. Not that such a pleasure is mine alone - the lobby outside the City University's overheated Oliver Thompson lecture theatre is teeming with fellow cake scoffing fans, each being presented with their portion by a celeb. Just what is going on? Well, we're here to celebrate two decades of what is fast becoming a genuine publishing phenomenon. 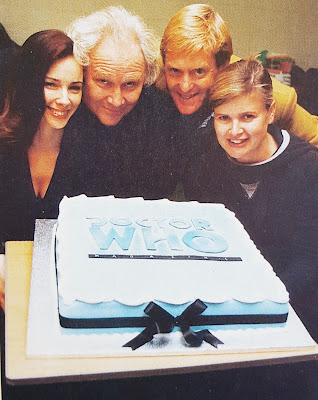 
Have you noticed how Doctor Who gives great clips? More and more, the only really new things we can see are artfully collated sequences with suitably powerful music that give the impression of wonder. Conventions too are increasingly about celebrating 'bits' of the show. Close on a decade after the last regular story, time inevitably moves on and while hard core fans and, increasingly, professional writers delve into ever more trivial and miniscule territory the people who made and appeared in the show recall less and less detail and much of what they do remember is anecdotal and samey. Thus the success or otherwise of guests depends increasingly on their strength of personality. Some things don't change though; if it's PanoptiCon, it must be the Leofric Hotel in Coventry, a city that this very weekend celebrated the arrival of Sunday shopping with Morris dancing and clangey rock groups. Yes, that's the Sunday shopping everywhere else started two years or more ago but at least we can look forward to a right knees up, in honour of Labour's election win, next year!
Read more »
Posted by John Connors at 14:16 No comments:


Coventry was demolished during the Second World War and had to be rebuilt almost from scratch afterwards allowing planners the unique opportunity to design its city centre with practical considerations in mind. Paradoxically this has made it now seem less modern than other places. It resembles a bizarre mixture of Alpine village and concrete jungle; everything is in squares and straight lines and the railways station is about a mile from anything else. It’s as if, faced with the freedom to create, the planners instead came up with something very much of its time. More recent attempts to modernise have given the city a weird canopy in its main square and an indoor precinct that looks like every other indoor precinct. The only significant old building is the shell of its cathedral. Nestling in one corner of a covered walkway, the Leofric Hotel is an excellent convention venue and even the bar staff, often the most harassed people at an event like thus, cope with good humour as the place fills up with the buzz of a Doctor Who gathering.