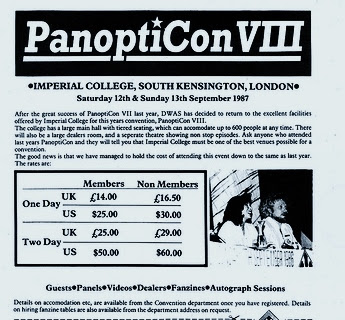 
MC- David Banks
`The Faceless Ones` episode 3
Colin Baker, Nicola Bryant, Tony Selby – Colin showing off his new slimline figure while Nicola in an answer to a bold question from the audience revealed she was married. Tony made a point of saying how hard JNT had worked to keep the show going.
Sophie Aldred- Introduced as if she were a competition winner, this was her debut convention appearance and she seemed a bit overawed by it. There was also an on screen message from the unavailable Sylvester McCoy.
Barry Letts, Terrance Dicks, Don Houghton and Bob Baker.


Graeme Harper – also talked about Star Cops
Alistair Pearson, Andrew Skilleter, Sandra Reid, David Banks
Chris Clough – he revealed that it was he who cast Ken Dodd in `Delta and the Bannermen` explaining that he regards him as one of the best comic entertainers in the business.
Auction – included the Key to Time (well a lump of Perspex) bought for over £1,000 by Andrew Beech. Plus the `banana gun`, a yellow gun from `Terror of the Vervoids` bought by someone in the East Kent Local Group with whom I spent a happy time that evening.


`Evil of the Daleks` episode 2.
Deborah Watling, Morris Barry and Victor Pemberton - They all praised the just shown `Evil` episode, Debbie commenting that in the old days “it was played for real”. Victor Pemberton said it was sad that the current series was in such a state.
William Emms, Paul Erickson and John Wiles.
`Power of the Daleks` episode 1 – no not a missing episode as such but a version that had been cleverly put together using the many off screen still.
Philip Martin, Dick Mills.
Katy Manning, Nicholas Courtney, Richard Franklin – a fun panel with a rapturous reception for Katy who proved to be as scatter brained as ever!
Peter Davison, Janet Fielding, Sarah Sutton – slightly ill tempered panel due to uninspiring audience questions and both Peter and Janet cutting their fingers on the metal chairs.
Closing ceremony included the late Robert Holmes’ daughter accepting an award for his contribution to the show over the years.