The Doctor Who Holiday Special 1977 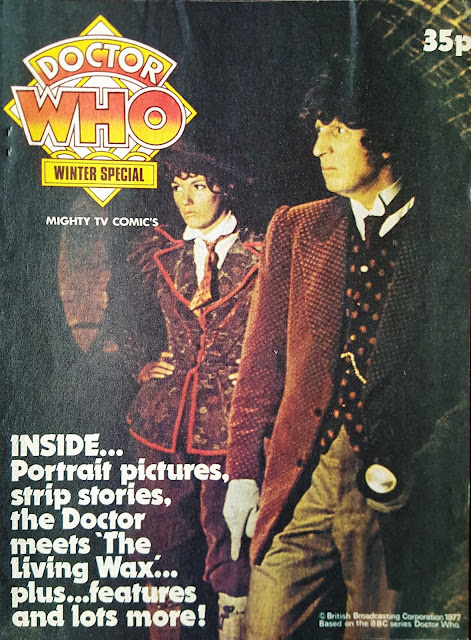 Our look at the three magazines produced by Polystyle Productions during the Seventies concludes  with the 1977 Special.
It would be more than three years before another Special but in the meantime Doctor Who fans had enjoyed two brilliant glossy poster magazines that abandoned comic strip stories and educational articles about space to print gorgeous colour photos and have pin ups of Styre and Vorus! Quite why then Polystyle returned in late 1977 with a Winter Special that did none of these things and didn’t even match the previous ones is a mystery. Anyway return they did on cheaper paper but now costing 35p. The cover photo is of the fourth Doctor and Leela in the sewers during `Talons of Weng Chiang`. This will turn out to be the visual highpoint unfortunately.

The Doctor Who Holiday Special 1974 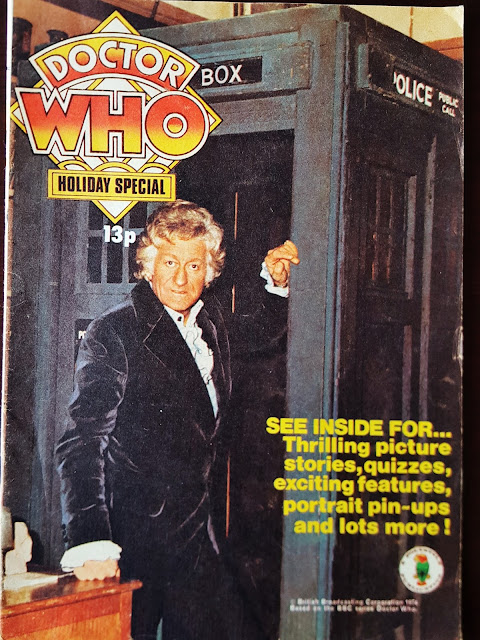 Our look at the three magazines produced by Polystyle Productions during the Seventies continues with the 1974 Special.

The 1974 Special is fronted by a curious photo of the third Doctor looking a bit knackered. See inside, it says, for “thrilling picture stories, quizzes, exciting features, portrait pin ups and lots more!”
Judging from the photo the excitement has exhausted him! Jon Pertwee’s introduction on the inside page hopes we have a lovely holiday and continue to be fans of the Doctor. Well so far I am but the holiday I’ve totally forgotten!
`Doomcloud` is the first comic strip story this time concerning the bulbous headed Zirconians who seem to travel about looking for new planets in the middle of a galactic cyclone. After only a page and a half this is a far more engaging story than any of the ones in the 1973 Special. In order to save people’s lives UNIT has to evacuate everyone to nuclear shelters as a poisonous cloud envelops the world. The ending is a little pat but even so this is a good start.
Read more »
Posted by John Connors at 14:38 2 comments:

The Doctor Who Holiday Special 1973 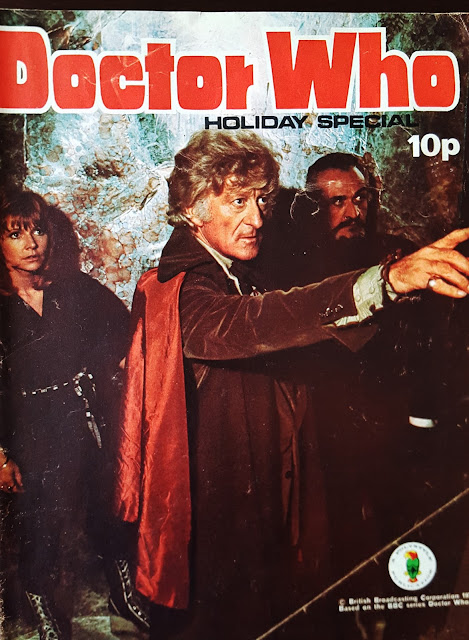 During the Seventies a number of one off Doctor Who magazines were released including three Specials which were produced by Polystyle Publications (yes, their logo features a parrot!) who were based in Edgeware Road in London and produced the magazine TV Action. Published in 1973, 1974 and 1977 it is fair to say these are not the best examples of Doctor Who publications in a decade that brought us the Radio Times Special, The Making of Doctor Who and two excellent poster magazines. Nonetheless they are an interesting snapshot of another era.


This is by far the best and the one that would be of most interest to fans, especially in the day.  It cost 10p back then! The first thing that strikes you is the rare photograph on the cover which seems to have been specially shot during the making of `Frontier in Space`. It depicts the Doctor, Jo and The Master all looking at something to which the Doctor is pointing. Perhaps it was Barry Letts dancing a jig? It’s a fairly random picture for the cover except that it does feature the three principal cast members. Eschewing an official logo the bold red words Doctor Who are emblazoned across the top. However much of the rest of the mag uses the shorthand Dr Who.
Read more »
Posted by John Connors at 15:14 No comments: