The Face of Evil


“At last we are here. Us.”
Why did BBC4 show `Face of Evil` this week? Do people celebrate the 39th anniversary of something? Who am I? Yes, a curious end to 2015 sees this 1977 tale being broadcast on a main(ish) BBC channel which is about as random as you get. It’s nice though that they chose this rather than the more obvious stories that surround it. In another season `Face` would be highly regarded but appearing in between `The Deadly Assassin` and `The Robots of Death` it doesn’t stand a chance really. I can’t imagine BBC4 are showing it because it has thematic links to the season we’ve just seen but you never know. It is really the precursor to the current series’ interest in the Doctor’s mistakes though there are no confessions dials or guilty admissions to be seen here, just a dogged determination to sort it out. 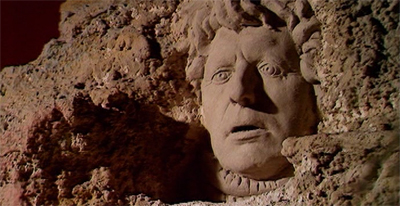 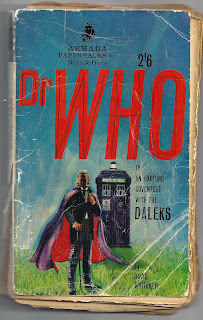 The novelizations of the series have occasionally thrown up anomalies but there is none more prominent than the very first which goes under the dramatic moniker of Dr Who in an exciting adventure with the Daleks. Beyond its historical significance David Whitaker’s 1964 novel is notable for the way it changes the story of how Ian and Barbara first encounter the Doctor. Gone is the iconic Totters Lane junkyard, in its place the foggy environs of Barnes Common. It is plausible that some Doctor Who fans grew up thinking this was what the first story was like and it a very persuasive alternative to how the episode `An Unearthly Child` did play out.The novel – originally published by Armada – is determined to set its own atmosphere. The back cover blurb reads: “The story from the beginning! Here is the exciting adventure of Dr Who, Susan, Barbara and Ian, from the moment they meet one foggy autumn night on a lonely common beside a Police Box (Ah, but what a curious Police Box!) to the time they encounter the weird Daleks”. Have we ever heard the Daleks described as `weird` before? Then it goes on to confidently say that “It is a thrilling story, and we know this book will be one of the most popular published in the Armada series. Can you wait any longer? Start reading!”
Read more »
Posted by John Connors at 15:21 No comments: