Why I love the Special Edition of Day of the Daleks 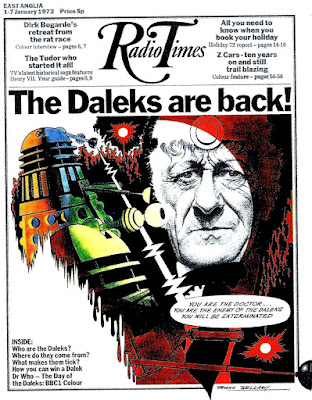 In 2011 Doctor Who fandom was divided about the merits of the Special Edition of `Day of the Daleks` but I loved it and four years later I still do. Fact is I actually-gasp- prefer it to the original. This is only because it really is the original as the production team and viewers would love to have seen it. I suspect many viewers think this is what they saw! The story hasn't been changed but enhanced to better support the narrative. Plus if you don't like it, the original transmitted version is on the dvd as well.  This story was an event and a half in 1972. The Daleks back for their first story in seven years, heralded by a stunning Radio Times cover. As a season opener, being this Doctor’s first rematch against a former incarnation’s enemy and also a time hopping tale that encompasses a possible world war it is within touching distance of classic status. Why doesn’t it quite reach? Well, when the Daleks finally travel to our time to invade there are, let’s face it, three of them. And all the beautiful autumnal Sun filtered filming cannot disguise this fact. It shouldn’t matter but it does.
Read more »
Posted by John Connors at 14:42 No comments:

The Tale of the Africa 90


(Or at least the Nigeria 9!)
WARNING! This post does not include any new information about the location or future release dates of any missing episodes. Just in case you got too excited.
Africa 90 sounds a bit like the name of a football tournament but is actually the unofficial name given for a supposed haul of most of the missing episodes of Doctor Who in Nigeria. It’s the most fluid Doctor Who related news story there’s been in years and by the time you read this it may well have changed again. It’s a tale of dangerous expeditions to Africa, of financial intrigue in the UK and of how key movers in the Doctor Who world can close ranks with surprising effect. It is about blatant denials from various sources. It’s a better plot than anything last season! The one immutable fact is that some of these episodes have seen the light of day. `Web of Fear` and `Enemy of the World` both containing previously missing episodes were made available in the autumn of 2013 first via iTunes and subsequently in 2014 on DVD.  The rest is less certain.

The origins of Doctor Who (possibly!)


Doctor Who’s beginnings- the `real` behind the scenes story
as researched by JJJ Pixley
Sydney Newman liked to tame lions and it was this mixture of bravery and madness that he brought to the BBC in the early 60s. Fired out of a cannon he arrived at Broadcasting House full of ideas for programmes. A new science fiction based series aimed at children had already been discussed when Newman had a glorious idea. He was walking through Hyde Park one afternoon in late 1962 when he saw a crotchety old man trying to strangle a duck. This set him thinking; what if there was a series featuring a crotchety old man. At this point that was the only idea he had; in fact the same crotchety old man was approached to star in the series but was deemed too fierce for television.
Read more »
Posted by John Connors at 11:42 No comments:

Kids love ice lollies so linking them to a tv series is a great idea yet this ice lolly which enjoyed popularity in 1975-76 did not feature the Doctor but instead starred his greatest enemies. Comprising a moregous combination of chocolate and mint, the Dalek Death Ray would taste amazing whatever it was called. The top half of the lolly was mint followed by a chocolate base.  Unlike some overly sweet lollies it also did the trick of really cooling people down in the days when we had normal summers.
Produced by Walls, the product had the added attraction of the stunning Frank Bellamy artwork that adorned the wrapper meaning many fans kept them for years. The lolly also had other Bellamy drawings included which were taken from the 1976 Dalek Annual. These showed aspects of the Daleks’ world and history beyond their encounters with the Doctor. Evocative titles include `The Swamp Creatures of Terroth!, `When Daleks Flooded the World` and `How Daleks Bend Time`.
As part of the promotion of the lolly, Walls were even reputed to have a fill sized Dalek in the reception of their main office.

below. Yikes! it's those pesky swamp creatures from Terroth. 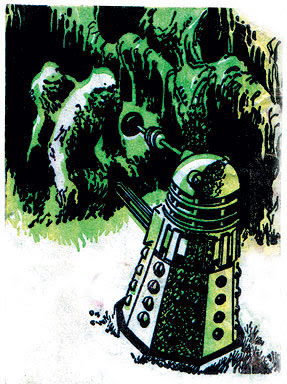 Posted by John Connors at 16:02 No comments: